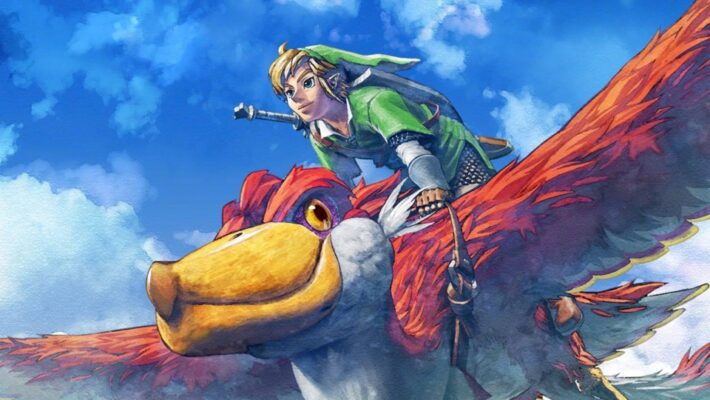 The Legend of Zelda: Skyward Sword originally released for the Nintendo Wii in November 2011 to critical acclaim. This entry provided a more experimental take on traditional gameplay mechanics, utilizing motion controls that controlled sword slashes and move execution. While it was largely considered one of the less popular titles in the franchise, Nintendo rereleased Skyward Sword HD for the Nintendo Switch so a new generation of players that can experience what is considered to be the narrative foundation for the series. The result is an adequate entry, but one where its history and original control scheme’s legacy still can influence people’s enjoyment.

The Legend of Zelda: Skyward Sword serves as a foundation for the lore in The Legend of Zelda universe. It elaborates on a different creation myth from the one told in The Legend of Zelda: Ocarina of Time, but cements the recurring theme of reincarnation. The story is fairly stock and standard, with the player assuming the role of Link and Zelda, who live in islands called Skyloft above the Surface. It falls to him to rescue her after she falls to the world below after performing a special cultural ritual known as The Wing Ceremony in honor of the Goddess Hylia. The game takes no time in introducing Fi, a spirit that serves as your navigator as you embark on a journey to ultimately fulfill an ancient prophecy.

If you’ve ever played a The Legend of Zelda game, then you’ll know exactly how this goes. Skyward Sword HD doesn’t deviate from the formula too much. It explores the creation of the Master Sword, an item that has served as a cornerstone of the series for decades, and tangles itself up in rich lore that serves as a catalyst for the events of previous and future games.

And in retrospect, there are aspects of Skyward Sword’s narrative and leitmotifs that feel closer to Breath of the Wild than any other game. I don’t think this is necessarily a bad thing, as The Legend of Zelda games are largely self-referential, even more so with the branching timelines. But it helps tie everything together and with floating islands appearing in The Legend of Zelda: Breath of the Wild 2 trailer, it left me ruminating and theorizing about possibilities for that future release. I found it elevated my overall experience, due to a love of theory crafting. Skyward Sword HD lends itself to that well enough to that and, as the first game in the various branching timelines, it’s a perfect entry for those new to the series. 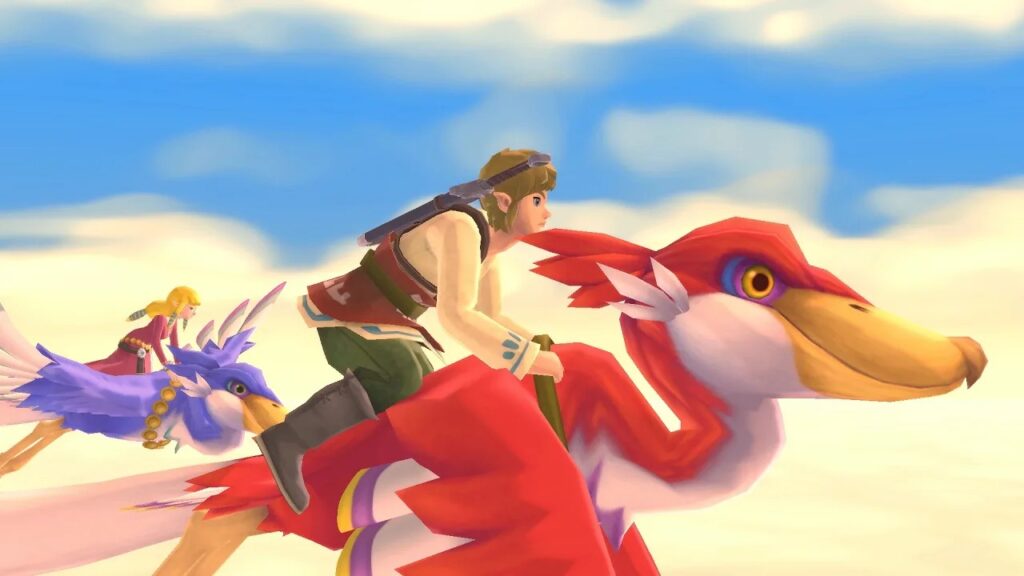 Gameplay in The Legend of Zelda: Skyward Sword follows the series’ standard formula. Players start with a sword and shield, and eventually acquire other weapons and tools while making their way through the game. This happens both through story progression and dungeon progression. Like previous titles, the player will find themselves equipped with a bow and arrow, which largely serve as your primary method of disposing of enemies at a distance. The sword and shield you acquire are largely temporary additions, as shield degradation is very much a thing.

Players can enhance their weapons and repair shields at a designated blacksmith with required items that can be found throughout the world. Potions can be powered up as well and are stored in your inventory, which is limited initially and can be expanded. A total of three upgrades are available, but if you want to hold onto your items, you can deposit them at an item check-in center. Thankfully, heading back to any of these invaluable NPCs is relatively easy, as locating save points through exploration is simple and you can teleport back to Skyloft when interacting with these statues. Another key gameplay feature is a stamina system, which requires players to measure how much stamina they’ll exert when running or climbing through areas and dungeons.

A total of two control options are available in Skyward Sword HD, which include a motion controls and a traditional scheme with buttons. For the most part, the motion controls functioned well enough to keep me moving forward. I ended up spending a fair amount of time facing some bosses, due to the need to reattempt them. The game requires precision to get the job done, as some enemies require exact vertical, horizontal, or diagonal slashes to take down. There were some issues getting used to the control scheme and swiveling my camera around, which persisted until the end of the game. It didn’t detract from the overall experience in any major way, as this control scheme lends itself well to the original design of Skyward Sword. 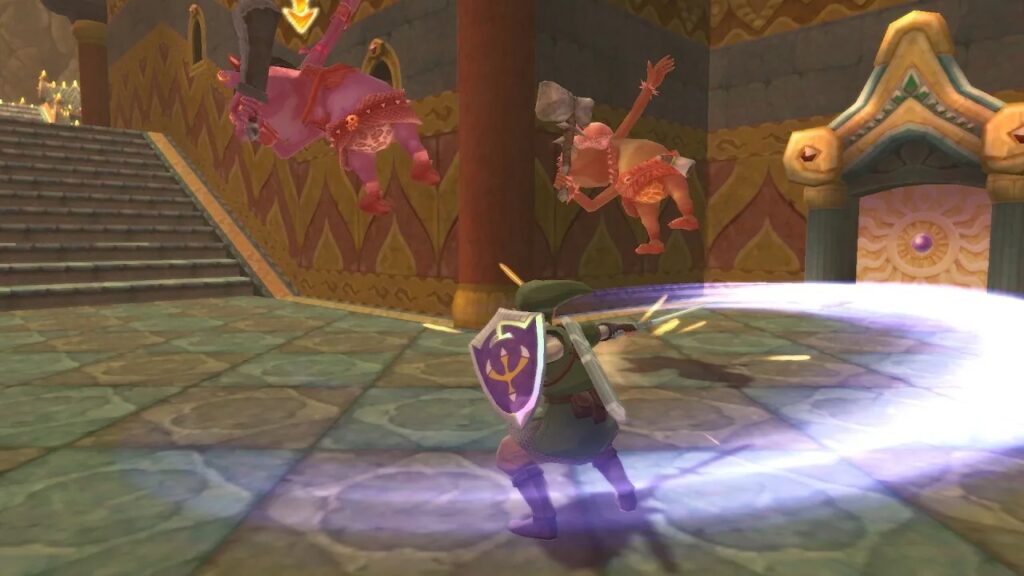 However, the button control scheme felt miserable when I would use my Nintendo Switch in handheld mode. It is something of a nightmare, as the joystick designated to swing your sword is also used to move your camera to get a better view of your surroundings. I never got used to this and would often accidentally swing my sword around haphazardly when trying to survey my surroundings. It ultimately tarnished my experience with Skyward Sword HD.

Segments that required me to take to the skies were even more irksome, as the camera controls were inverted without any way to change them. I keenly felt this frustration when fighting one boss in particular, as it required me to engage in aerial and melee combat during specific intervals. It is clear that the intended control scheme for the game focuses largely on the motion controls. Everything from the combat to how you interact and move around the world is drawn from the use of motion controls and the gimmicks that accompany it. And not using the preferred method of play dampers the experience overall.

Aside from the additional control scheme options, little about The Legend of Zelda: Skyward Sword changed outside of some quality of life features. These alterations include items no longer popping up to give you descriptions upon quitting and loading up the game, which seems to be a major feature. Additionally, the game is upscaled, with the bloom from the original release mostly removed. Looking at comparison images, I feel like this didn’t detract from the art design of the game, as it still kept its somewhat painterly look. 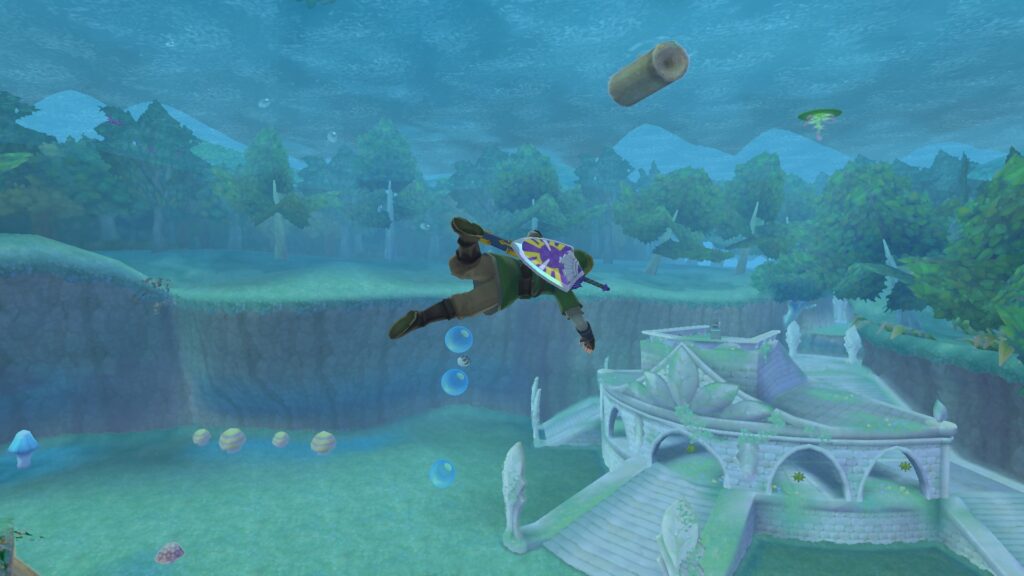 Environments are vivid and beautiful, with each punctuated by a unique design that helps elaborate on the events that transpired on the world below Skyloft. Additionally, character designs are distinct and largely unique, passively telling players about the world at large. The title succeeds in its environmental storytelling through its gorgeous designs often accompanied by melancholic or whimsical scores. Fi’s theme and its various renditions help set the tone of Skyward Sword HD and set the tone for the various events that transpire through its story. Hearing previous themes work their way into the score of Skyward Sword was also a delight, as it allows the player to piece these little homages together into something more substantial that helps tie the series together.

In terms of accessibility, players cannot remap their controls which leads into my earlier criticisms of the controls. Thankfully the font is large enough to easily read, and the stylized user interface doesn’t obscure the screen. The game performs well in handheld mode, so those limited to playing it through the Switch Lite won’t have to worry about potential performance issues. 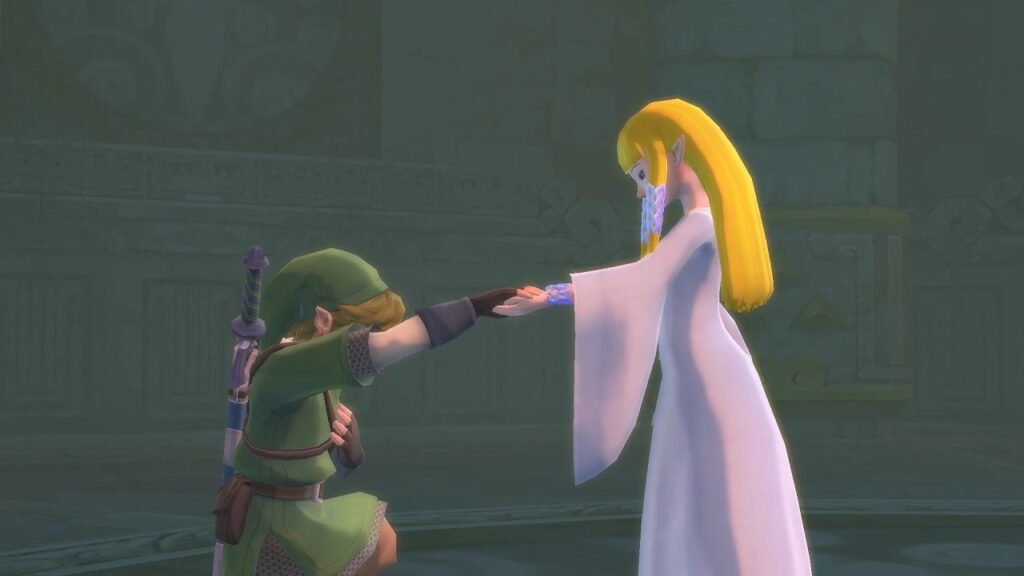 Ultimately, The Legend of Zelda: Skyward Sword HD is a decent enough entry point for those looking to get into the series. However, it is hindered by the inability to remap controls and the implementation of a poor secondary control scheme. That being said, it couldn’t exist any in any other form due to its original release relying so heavily on motion controls. Despite its flaws, it still offers the quintessential The Legend of Zelda experience.

The Legend of Zelda: Skyward Sword HD is immediately available for the Nintendo Switch.

Take to the skies, draw your sword, and experience the earliest story in the Legend of Zelda™ series. Join Link in his high-flying quest to save Zelda, a childhood friend who must confront her destiny. Soar between floating islands and descend to the treacherous surface world in this updated HD version of the Legend of Zelda: Skyward Sword game.
7