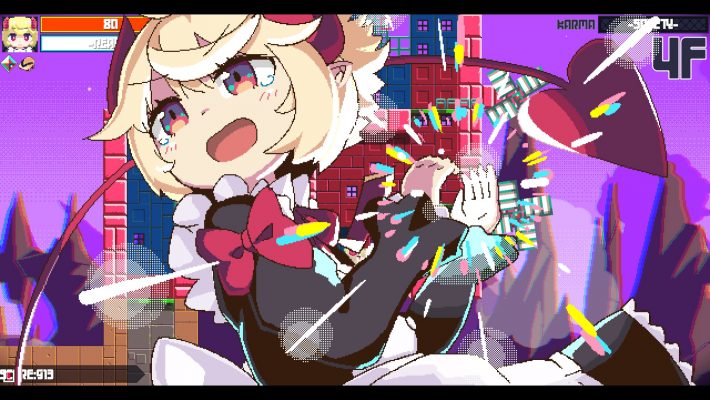 Tokoyo: The Tower of Perpetuity is a weird little game! It’s a genre-bending indie title. One which is billed as a roguelike, though I’d say that’s not exactly true. It demands skill and precision! Especially since you only have a day to master the titular Tower of Perpetuity. But what really sticks with me is how well this platformer that prioritizes evasion really captures the shoot’em up spirit.

Cocoa, Imibi, Kanae, Kukuri, and Shippo de Tail all find themselves drawn to a deserted tower. They have no idea why. All they know is that they are compelled to ascend it and reach the summit. However, every day its layout changes. (That’s in real-world time.) Not to mention there will be an opportunity to choose paths within, which will further determine layouts and bosses. Your goal is to reach the top, and potentially also climb the online leaderboard as you do.

There are four elements I feel define Tokoyo and set it apart. The first is that there is no “attack.” Instead, your goal is to attempt to evade enemies and hazards as much as possible. The second is that each character has their own skill. These are unique to every person. They also function much like shoot’em up attacks, with various bullet patterns briefly dealing damage within certain ranges. Third is the Karma system. As you go through a floor of the tower, you’re encouraged to be quick about it, lest Karma build up and a strong foe appear. Finally, dealing with most enemies involves either evading their bullet-like attacks or gauging their movement patterns. Which means that while you are jumping from platform to platform, dealing with rooms that have things like limited fields of vision or platforms and walls hidden until you’re on top of them, you are constantly working on timing and predicting assaults.

Especially since the boss fights feel straight-up pulled from shoot’em ups like Touhou Project. When you encounter one, you’ll see a huge foe on the field. They typically have a temporarily field in place for certain periods. Which means during those phases, you have to evade multiple types of bullet attacks. Maybe they fly out from set spaces across the “stage.” Perhaps they fly out as a cluster! Occasionally, they will fly out in circles with small gaps to jump toward. Once the shield drops, you’ll typically have a brief respite to get into position and use the character’s special to attack. Which prompts the shield to restore, a person to wait for a character’s MP to fill so they can use the skill again, and more dodging.

Which means Tokoyo feels a lot like an arcade platformer with shoot’em up roots. I understand why it might get the “roguelike” name tied to it. As you ascend the tower, you’ll come across relics. These provide various boosts. Maybe a succubus’ control-altering debuff won’t last as long, your MP will fill more quickly, or you could see health restore when moving between floors. As you ascend, you’ll see gravestones from other players who fell along the way. (You might even see a relic above it!) You’re encouraged to pick yourself up and tackle the procedurally generated tower of the day again after each run. It also gets more challenging the higher you go. But really, this is a different sort of test that blends other game elements along the way.

Though one thing I will note is the trials Tokoyo puts you through could perhaps use a little more balancing and relic variety. This is absolutely a game in which skill matters. The more you play, the better you’ll get at it. Even though you’re essentially facing a new “tower” each day, certain commonalities and situations might present yourself. You’ll gradually build up awareness and learn how to handle specific foes. Also, the platforming itself is never too demanding. Just after a few days, it sometimes felt like I was constantly seeing the same sorts of relics and occasionally facing unrealistically unfair odds. But then, this is the sort of game in which it could take a few weeks to really start to master, so it could come down to my needing more time to acclimate.

But even if it does take time to adjust, a good thing about Tokoyo is that its controls are quite tight. This is a very responsive game. I didn’t notice any sorts of input delays. Which is critical, given the number of bullets you might deal with onscreen. It is also very clear in terms of its visuals. You can right away determine where enemies are. There will even be alert indicators on-screen if they are on the same floor, but not onscreen. Though characters are small, they are vivid and pretty well-defined. There’s also a bit of humor there, what with folks able to choose their “last words” for their gravestones when they fall. I’m not a fan of the soundtrack. It didn’t click with me and I found it irritating sometimes. But it generally works well.

Tokoyo: The Tower of Perpetuity is a novel challenge. It forces you to get creative, consider timing and patterns, and push yourself to improve. There’s also a sense of urgency, both due to the fact that the tower layout changes daily and karma encourages you to not loiter around. Yet at the same time, there isn’t too much pressure. Tomorrow is another day. You might be better another day of the week or when using a different character. Not to mention there’s no real penalty for not being the best. It feels like the kind of game someone could devote a few weeks or months to, gradually getting better or enjoying for a brief part of every day

Tokoyo: The Tower of Perpetuity will be available on the Nintendo Switch and PC on June 2, 2022.

Tokoyo: The Tower of Perpetuity

You find yourself trapped in a mysterious tower – one that transforms its very structure every 24 hours. The legacy of your epic struggle shall be carved into the hearts of those who challenge you like an epitaph. Surpass countless poor fallen souls and make your way to the heretofore unseen top! Nintendo Switch version reviewed.
7

Tokoyo: The Tower of Perpetuity is a novel challenge. It forces you to get creative, consider timing and patterns, and push yourself to improve.