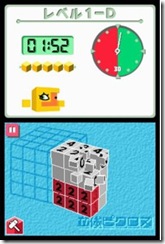 Rittai Picross (3D Picross) is a twist in the evolution of nonogram logic puzzles. Instead of marking spots you chisel a rectangular solid. Each brick has numeric clues written on the faces. A number indicates how many blocks should be in a row. The rest need to be broken by holding up on the D pad and tapping a block to smash it. Blocks you want to save can be protected with a coat of paint that grants invincibility from the game’s mallet. Once all the unnecessary pieces are gone an object like a letter (the alphabet kind) or an animal is revealed. Unlocked objects act as trophies sitting in scenes. The cuboid giraffe I found now spends its days in a safari area.

The opening puzzles in Rittai Picross are a breeze with only one layer of blocks to worry about. This gives players time to learn tricks like destroying all the rows with a “0” as a first move. Why look for zeros? Rows with zeroes don’t have any blocks in the final object. The trick to Rittai Picross is eliminating what you don’t need so you can focus on what to save. After extracting the junk any complete rows, rows where the number is same as the solid’s width, act as a base for building the puzzle. Now things start to get trickier. You have to rotate the solid to scan for clues. 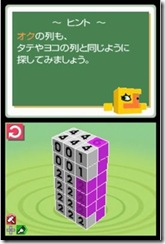 “So this vertical column has two blocks… the intersecting horizontal row has one and there isn’t a depth clue. Should I save this block?” is the typical thought process. Like Picross, you can brute force your way through any puzzle by chipping away at the solid haphazardly. Broken blocks magically reform for the first four mistakes. If a fifth mistake occurs you have to restart the puzzle from the beginning. Since you have unlimited continues, it’s just a matter of remembering the mistakes you made and not making them again. Nintendo has a system in place to separate careful players from careless ones. In addition to getting a trophy object you earn stars for each completed puzzle. If you clear the puzzle without making a mistake on your first try you get three stars. Make a mistake and you only earn two. A surplus of gold stars in a level lets others know you’re thinking your way through puzzles.

Levels have a series of eight puzzles to complete. Beat them all and you move on to a more challenging set of puzzles. Usually, the next wave has less clues and larger objects to play with. Eventually, you need to go inside solids and hollow them out. Two diamond shaped guides let make rows or columns temporarily vanish by sliding the stylus so you can extract out of place blocks. 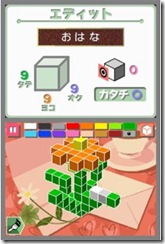 Once you solve a puzzle in Rittai Picross there’s no reason to go back to it. Puzzles have one solution which could make the game get stale fast. Edit mode alleviates this problem. Players can make their own puzzles by stacking cubes and coloring them. Once you design an object the game automatically hides it in a giant brick and attaches clues. Since you made the puzzle you probably won’t want to play it. Maybe one of your friends will? Puzzles can be traded wirelessly and each game can store 300 extra puzzles.

Nintendo also has a downloadable Rittai Picross puzzle pack schedule where you can get five new puzzles to play with. The first one is online and more are in development. All of them are free.

1.) Some downloadable level packs contain user generated levels based on themes promoted by Nintendo. Similar to Echochrome players send puzzles to Nintendo and they pick winners. A  “LittleBigPicross” setup with a blue ocean of puzzles to select from would have been better way to extend the life span of Rittai Picross.

2.) Puzzles can be sent to friends who don’t own Rittai Picross via download play. You can even send edited puzzles specially made for friends. A neat idea that also acts as a custom demo.

3.) Rittai Picross is a thinking game, not a reading game. If you can identify katakana or are patient when it comes to deciphering menus you won’t have a problem playing Rittai Picross. However, Rittai Picross seems like the kind of game Nintendo will publish internationally. Perhaps under the trademarked name 3D Picross.