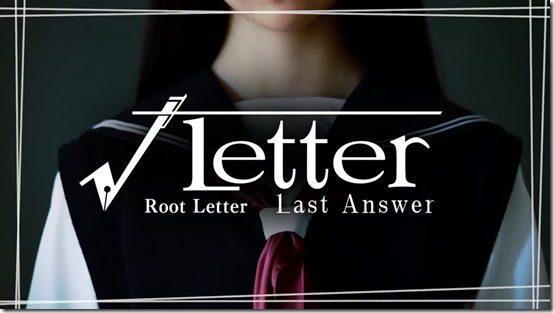 Publisher PQube Games announced that it is bringing over Root Letter: Last Answer, the updated version of Root Letter that adds a new live-action mode and new scenarios on PS4, Switch, and PC via Steam.

Check out the announcement trailer from PQube Games:

The return of the best-selling interactive mystery visual novel! Follow in the footsteps of Aya Fumino, a school penfriend allegedly involved in a tragic murder 15 years ago. Explore the prefecture of Shimane, uncover clues, and use the letters you wrote to each other to track down her childhood friends for questioning. But perhaps these friends, now adults living a peaceful life, will not be eager to let their painful memories resurface…

As for what’s new in Last Answer, it has a variety of gameplay improvements as well as brand-new epilogues that conclude Aya Fumino’s story. The main attraction is the new live-action mode, which players can choose to turn on at the title screen at any time to check out the game in live-action scenes.