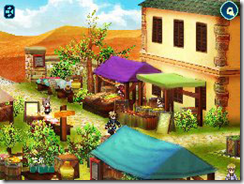 Sands of Destruction wasn’t at E3, but next week we’ll get a look at the North American version. Sega will show it and a bunch of other games at San Diego’s Comic-Con show.

Iron Man 2, which hasn’t been shown anywhere else, will make its worldwide debut at Sega’s booth.

Seems like Sega saved a handful of games for the event, but there’s still no sign of Phantasy Star Zero which is scheduled for a domestic release this winter.

Here’s the list of Sega stuff you can see at booth# 5229 if you’re attending Comic-Con.

Bayonetta – Bayonetta is a cinematic, stylized action game from the famed creative mind of renowned game developer, Hideki Kamiya. The game’s protagonist is a graceful, gun-wielding witch with powers beyond the comprehension of mere mortals. Facing off against countless fantastic enemies in stylish yet action-packed combat, Bayonetta uses outlandish finishing moves to take the action genre to a new level of excellence.

BLEACH: The 3rd Phantom (also at the Viz booth on Friday) – In this exclusive storyline, new details are revealed about the BLEACH universe stemming from before the start of the anime series. The story highlights the close partnership between two fraternal twin Soul Reapers, Matsuri Kudo and her brother Fujimaru. For the first time, players create and command their own team of eight Soul Reapers. In team-based battles, players decide where to place their team on the campaign map and also how to customize their character’s powers with the experience points they received through winning battles.  With exciting revelations and a lot more choice and strategy, BLEACH: The 3rd Phantom will thrill fans and newcomers to the series alike.

Iron Man 2 (also at the Marvel booth) – An all-new game that puts the power into the players hands and takes fans deeper into the Iron Man movie and comic universe. Featuring an all-new original story and a great interactive experience. Stay tuned for more official details in the upcoming days.

Planet 51 – Planet 51 is a galactic sized alien adventure comedy from the writer of “Shrek” and “Shrek 2”, which revolves around American astronaut Captain Charles “Chuck” Baker who lands on Planet 51, thinking he’s the first person to step foot on it.  To his surprise, he finds that this planet is inhabited by little green people who are happily living in a white picket fence world reminiscent of a cheerfully innocent American town circa 1950, and whose only fear is that it will be overrun by alien invaders…like Chuck!  With the help of his robot companion “Rover” and his new friend Lem, Chuck must navigate his way through the dazzling, but bewildering, landscape of Planet 51 in order to escape becoming a permanent part of the Planet 51 Alien Invaders Space Museum.

Sands of Destruction (Funimation booth) – From the master storytellers that brought you classic RPGs such as Chrono Trigger and Chrono Cross, comes an innovative role-playing adventure for the Nintendo DS. In a world surrounded by a sea of sand, the fate of the world lies in the hands of a small band of warriors known as the World Annihilation Front. Play as Kyrie and venture through oceans of sand with Morte, a mysterious girl crusading for the World Annihilation Front on a rebellious mission with her troop of recruits. Fight colossal monsters, battle tyrannical beastmen, and ultimately… discover that Kyrie holds the key to world destruction. The future of the world now lies in your hands.

SEGA & Sonic All Stars Racing – In a frantic battle to the checkered flag, Sonic & SEGA All-Stars Racing sees Sonic and friends speed around tracks set in mediaeval castle ramparts, lush rainforests and bustling cities, all taken from the visually rich and varied universes of Sonic and SEGA.  Fan favorites such as Dr. Eggman, Tails, AiAi, Amigo and many more will join Sonic in their custom built vehicles, revving their engines and jostling to stay ahead of the pack.  Each character will race around the track in cars, planes, motorbikes, and in AiAi’s case – a banana mobile!  Secret short cuts, swift handling and avoiding strategically placed obstacles are certainly the best way to get to the top of the podium.