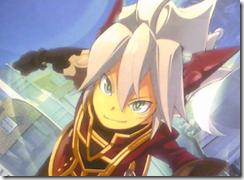 During the holiday lull we discovered a trademark for Rodea the Sky Soldier filed by Kadokawa Games in the USA. Ishaan and I couldn’t make heads or tails of it then, but now we know what it’s for – Prope’s upcoming Wii / Nintendo 3DS game.

This week’s issue of Famitsu has a feature of Machinist of the Sky Rodea, which could easily be interpreted as Rodea the Sky Soldier. The title (surprise!) is being published by Kadokawa Games in Japan.

While Kadokawa Games does not have a US office, they already have a localized title and they’re protecting it in the States. Both are good signs that Rodea the Sky Soldier will be released overseas, but who will pick it up? Our money is on Xseed.