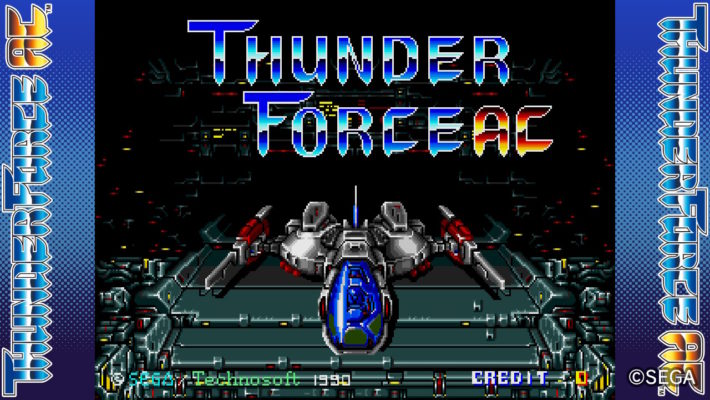 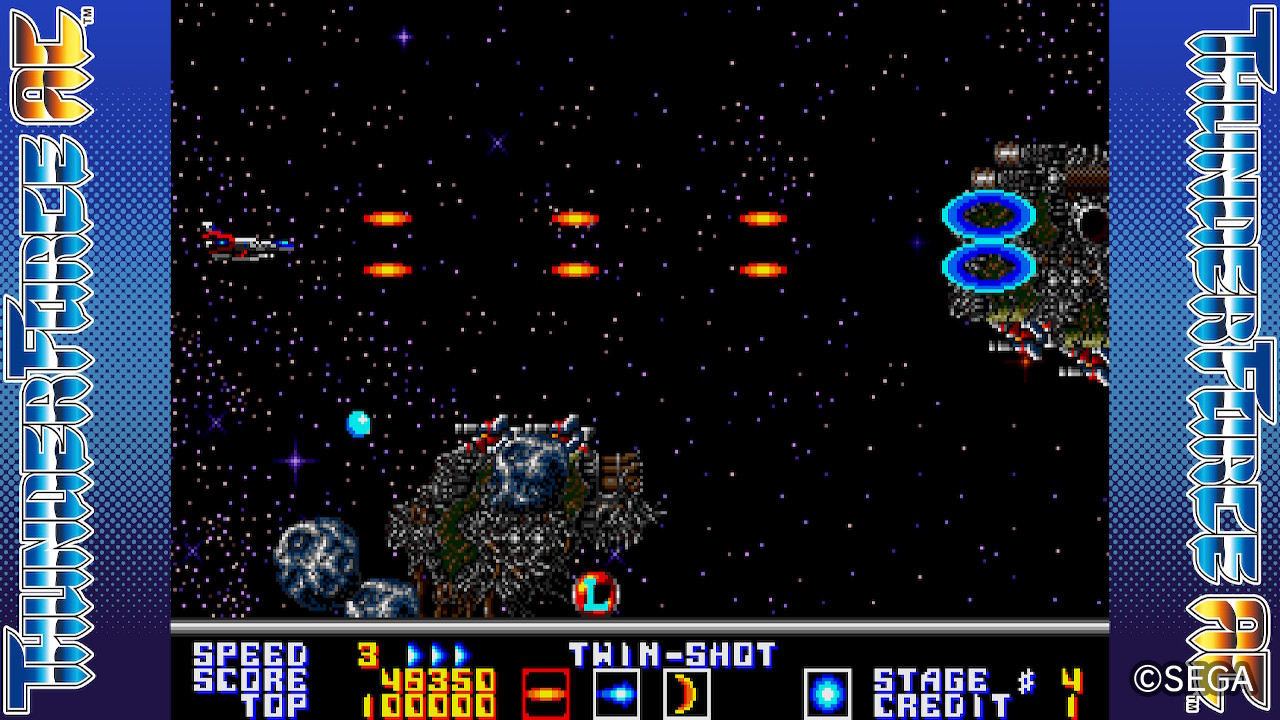 As with most other games in the series, Sega Ages Thunder Force AC has you take control of a starcraft well-equipped to deal with the hordes of enemies thrown at you. In this case, it is the LEO-3 Styx. The Styx is able to collect upgrades to its normal forward fire and back-shot, and you’re also able to collect special weaponry like the Wave, Hunter, and Missile weapons. While Thunder Force III allowed you to choose the stage order, this removes that feature in favor of a linear scale of difficulty, and in its latter stages can be downright quarter-munching.

What makes Sega Ages Thunder Force AC so enjoyable is the freedom of choice in weaponry, as each has its own specialties. You’re constantly pressing the change weapon button in order to deal with the stage hazards and enemies thrown at you and, best of all, even when your ship is destroyed, you only ever lose the weapon or upgrade currently equipped. This means that I really needed to manage the weapons very carefully, lest I lose it for upcoming bosses or challenges. For those who’ve played through Thunder Force III, it also offers several vastly reimagined stages, so even people who may have picked up the Nintendo 3DS version will find something new to experience in this take on it. 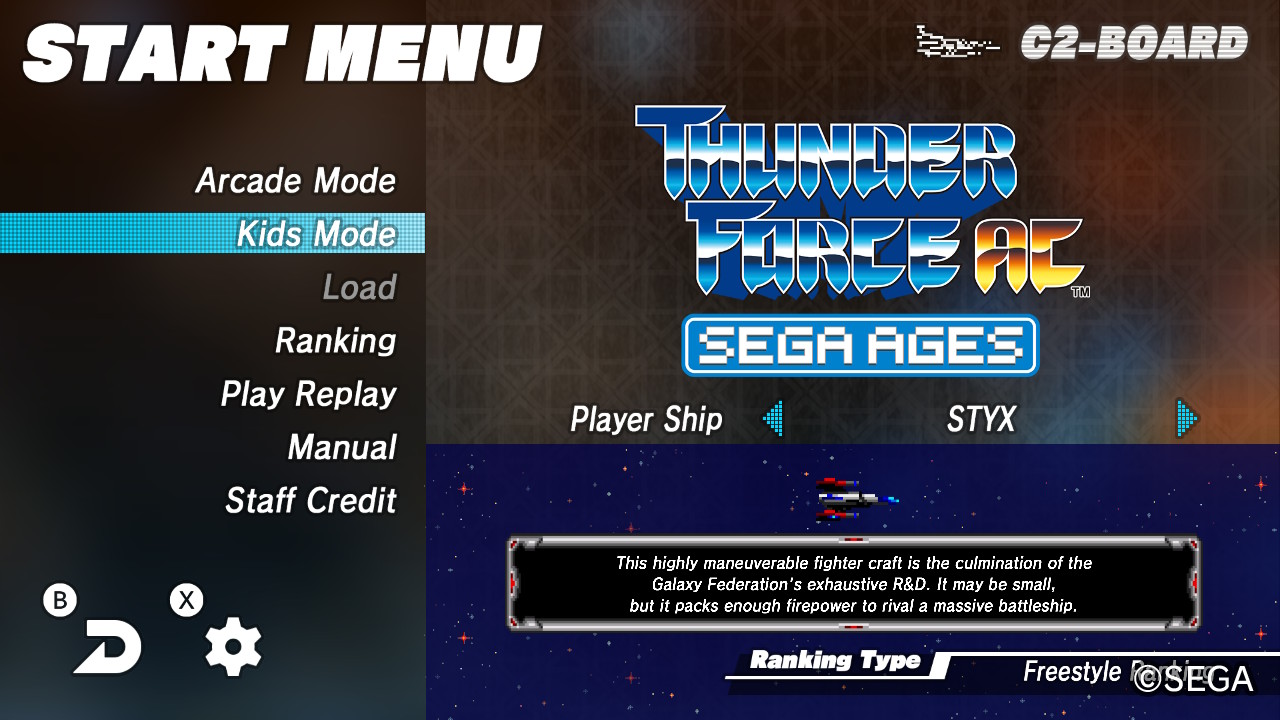 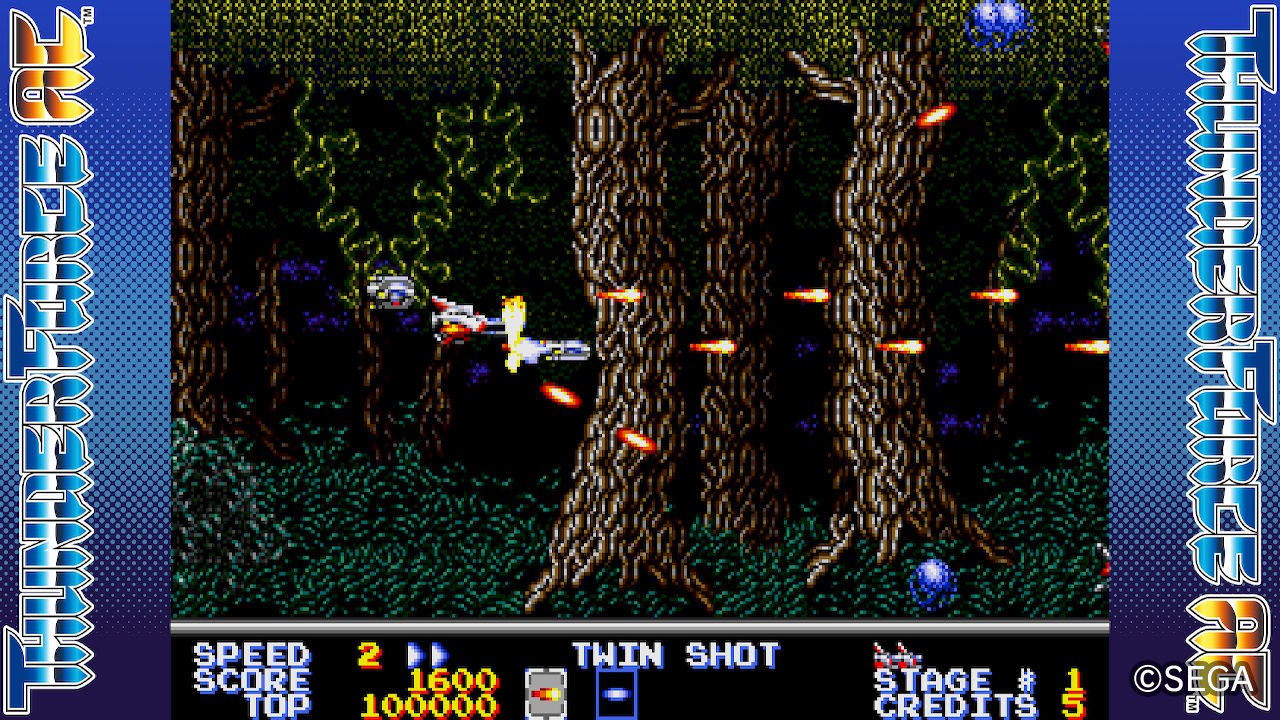 As enjoyable as it is, Thunder Force AC is a short game if you know what you’re doing. While the game is endlessly replayable if you’re the type to chase after high scores, the Sega Ages release also offers a few alternatives for those who’d rather enjoy a different experience. M2 has included several extra features to play around with, such as a few extra ships. There’s the Rynex, for example, which served as Thunder Force IV‘s player ship. The Rynex offers different weapons with its own properties, and I loved how it brought its own UI, upgrade icons, and even voice clips from its home game. There’s also the Styx Mass Production Model and, while I didn’t see any differences in capabilities, the Back Shot supposedly racks up more score than usual, providing a different playstyle for those who like to go for the top online rank.

Finally, there’s the Kids Mode, which doesn’t change enemy patterns, but increases player damage and also makes it so that you never lose your weapons. If you’re just trying to practice the patterns, I recommend this mode, and I also found it great for a casual run of the game. There are also standard Sega Ages options, like screen size and background configurations, as well as the ability to increase or decrease the number of lives per continue to tweak your own personal challenge.

Thunder Force AC may be based off a home console game, but its tweaks to gameplay plus the Sega Ages additions makes this a personal favorite out of the Sega Ages games I own. With many shooters nowadays focusing more on the bullet hell shmup sub-genre, it harkens back to simpler times with its stage hazards and focus on its weaponry management gimmick.