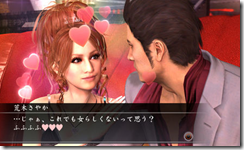 The game is not Yakuza 4. It isn’t a sequel to Ryu ga Gotoku Kenzan!, a side story that took place in ancient Japan, either. Like the most recent game, the Ryu ga Gotoku mystery game is being made for the PlayStation 3. Live in the Land of the Rising Sun? A digitalized version of you can appear in the game as a hostess or other bit character. Sega is taking applications at the end of this week.

Any guesses to what the setting and theme could be?