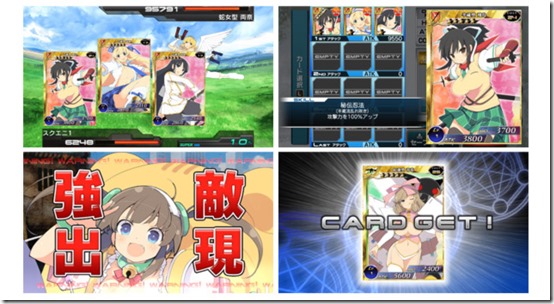 Senran Kagura’s high school ninjas are cameos in other Vita games. They were in Samurai & Dragons from Sega and on August 1 they will be in one of Square Enix’s games. Kaku-San-Sei Million Arthur, a social card game  originally for smartphones that was ported to Vita, will have cards for Asuka, Yumi, and other Senran Kagura characters.

There’s actually a story explaining the crossover. Someone stole Hibari-chan’s underwear and you have to find them. When the crossover event ends on August 3, the players that collected the most panties will get a special card. And the connection back to Senran Kagura: Shinovi Versus is the competitive mini-game where you fight other players to collect panties.