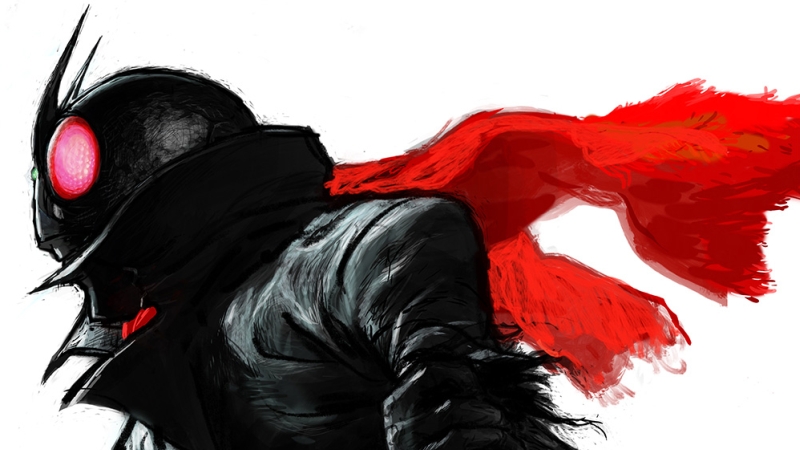 Toei is celebrating the 50th Anniversary of its Kamen Rider tokusatsu superhero franchise and announced a new feature film. That project is Shin Kamen Rider, which will be directed and written by Neon Genesis Evangelion creator and Shin Godzilla co–director Hideaki Anno. Alongside Shin Ultraman, this will be the third film to date involving Anno “rebooting” classic tokusatsu characters.

The Shin Kamen Rider announcement came as part of a special 50th Anniversary livestream, which aired messages from various creators and Anno himself. In his message, Anno stated that “50 years ago, nearly every schoolboy was fascinated with Kamen Rider, and I was no exception. 50 years later, I began this film project in the hopes of returning the favor in some small way.”

There was also a teaser trailer featuring music from the original Kamen Rider show, followed by key art for Shin Kamen Rider and a release window of March 2023:

The art shows a stylized illustration of Kamen Rider wearing a long dark coat, a red scarf, a glowing transformation belt, and sporting glowing red eyes. It’s unclear if this particular Rider is meant to be a new version of the original Kamen Rider 1 or an entirely new Rider.

Created by Shotaro Ishinomori in 1971, Kamen Rider is one of Japan’s most iconic and enduring hero franchises. New Kamen Rider shows have aired almost yearly since then, each new series adding a new cast, setting, and concept to the expanding multiverse. Multiple feature films and reboots have also been produced. In fact, this isn’t even the first Kamen Rider film with Shin in the title: 1992’s Kamen Rider Shin posited a more adult, horror-style take on the hero.

Shin Kamen Rider is expected in March of 2023. Kamen Rider, Super Sentai, and other classic tokusatsu series can be found on various streaming services like Shout Factory and Toei Tokusatsu World, but the selection varies. Fans can also play various Riders in games like Kamen Rider: Memory of Heroez on the Switch and PS4.