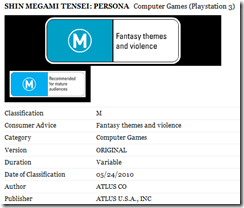 Atlus re-translated, remastered, and re-released Shin Megami Tensei: Persona in North America last year. The game still hasn’t been picked up by a PAL publisher, but Persona may be on the horizon.

And… on PlayStation 3? That’s what a rating from Australia’s OFLC says. A PlayStation 3 version of Shin Megami Tensei: Persona has not been announced by Atlus, however. Despite the “Shin Megami Tensei” header in title, it’s possible this rating could be for a PsOne classic re-release, but we don’t think Atlus wants to revisit that localization job.

This could be a mistake and the rating is likely, in my humble opinion, for the PSP version of Shin Megami Tensei: Persona. Either way, this is going to be a digital release. The OFLC notes Atlus USA is the “publisher” while Atlus doesn’t have an office in the land down under.

In both cases, Australian and probably European Shin Megami Tensei fans will get to play the very first Persona game someday in the future. The question is what platform(s) will it appear on.

Update: The OFLC updated the Shin Megami Tensei: Persona rating, which lists “Sony PSP” as the platform. Seems like our initial guess was right and the PSP version of Persona is coming to PAL territories.