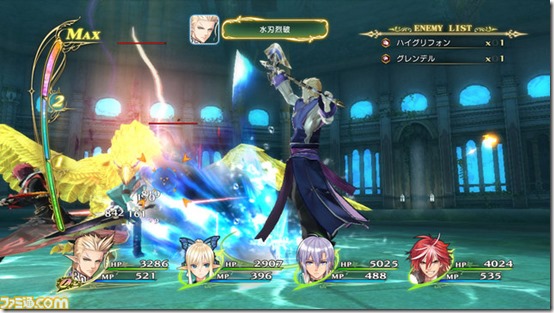 Shining Resonance released in December of last year, and it’s steadily been getting DLC to add  more to the game. The 16th set of DLC adds the sixth update to the automated dungeon-maker, known as “Grimoire”. Famitsu shows us what else is new.

As previously reported, the Grimoire is a special automated dungeon that lets you set “Sigils” acquired through combat to change the monsters and attributes that appear in the dungeons. 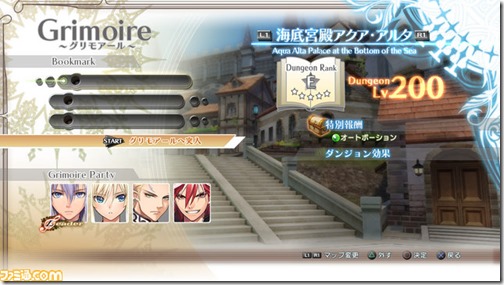 The Sigils let you customize the dungeon to your liking, so you can make it help for leveling up, or to provide more of a challenge for a chance of better loot. The latest DLC will increase the dungeon level cap to 200, so it’ll be a good opportunity to put some of those Sigils to use.

To give you a better idea on how it works, Famitsu provides a video that introduces the Grimoire dungeon. This feature can be downloaded as a free DLC, and to put it simply, each time you enter, the floors and monsters will change. The dungeons consist of the first floor, second floor, and the third as the boss floor.

In order to advance to the next floor, you’ll need to defeat the monster guarding the “Gate”. Once you get to the main boss of the dungeon, you’ll need to take it out to get your reward.

Once you have a set party before going into a Grimoire, keep in mind that you’ll be stuck with that party until you clear it. The Grimoire maps can vary with different themes, such as the water-based dungeon shown in the video, which has plenty of water-attributed monsters dwelling within.

These Grimoire maps can vary from scorching volcano-like dungeons with fire-based monsters to tropical resort dungeons that feature all kinds of monsters.

The latest DLC batch also adds a set of swimsuit costumes. These go for 500 yen each.

There are also Sigils that can be purchased for 100 yen each. Including some that let you fight phantoms of your own party members, which sound like it’ll be a good way to level up in order to take on the new level 200 dungeons.