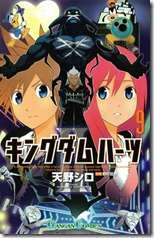 Illustrator Shiro Amano’s Kingdom Hearts II manga will end on May 12th, in the June issue of Square Enix’s Shonen Gangan magazine. In terms of standalone volume releases, the series will end with its tenth volume. (Thanks, Anime News Network)

Amano has also worked on manga adaptations of other Kingdom Hearts games, which were published in North America by Tokyopop prior to shutting down. The rights for these adaptations were then taken over by Yen Press in 2013.