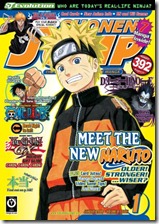 This January, Weekly Shonen Jump magazine, published by Shueisha in Japan, and Shonen Jump by Viz in North America, will be getting a makeover. Additionally, the latter’s website will debut special subscriber features starting in December.

About.com had a chance to speak with Shonen Jump senior editor, Joel Enos, who is also the editor on Naruto, about the magazine’s reboot and what it entails.

Here’s what Enos has to say about the short-term changes:

“It means a lot of different things, really. But specifically, the most exciting thing for us, the editorial team is that we’re able to show off a different look to the magazine after eight years. Visually, it looks different, it looks fresh. It looks very organized.

The original version of Shonen Jump looked good for the time when it came out, but you’ve got to keep current, and keep up with what’s out there. I think this change makes the magazine look more contemporary.

The most exciting thing for the fans is that we’re bringing back Yu-Gi-Oh. We’ll be serializingYu-Gi-Oh! 5D’s every month. We’re also launching a new series by a relatively new manga-ka; it’s called Psyren. It’s a science fiction adventure story. It’s really, really cool. The first two chapters will be featured in the January 2011 issue too.”

Shonen Jump is also going to be offering more variety in the form of a digital magazine, Enos says, where the digital version will allow for complete serializations, rather than just previews. There are also plans for an iPad version of the magazine.

I’d highly recommend reading the entire interview, since it sheds a fair bit of light on what Viz’s upcoming plans for the Shonen Jump reboot are, with regard to serializations.