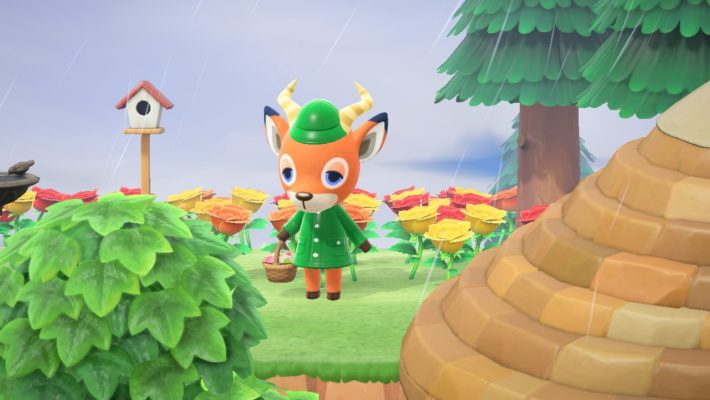 There are times when an Animal Crossing game can feel more like a Pokemon title, when you consider how many different neighbors could appear. After all, over 380 characters are in Animal Crossing: New Horizons alone. But which of these animals are among the Animal Crossing best villagers? It’s a question with no real answer, to be sure. However, our staff does have some favorites we’d like to share. 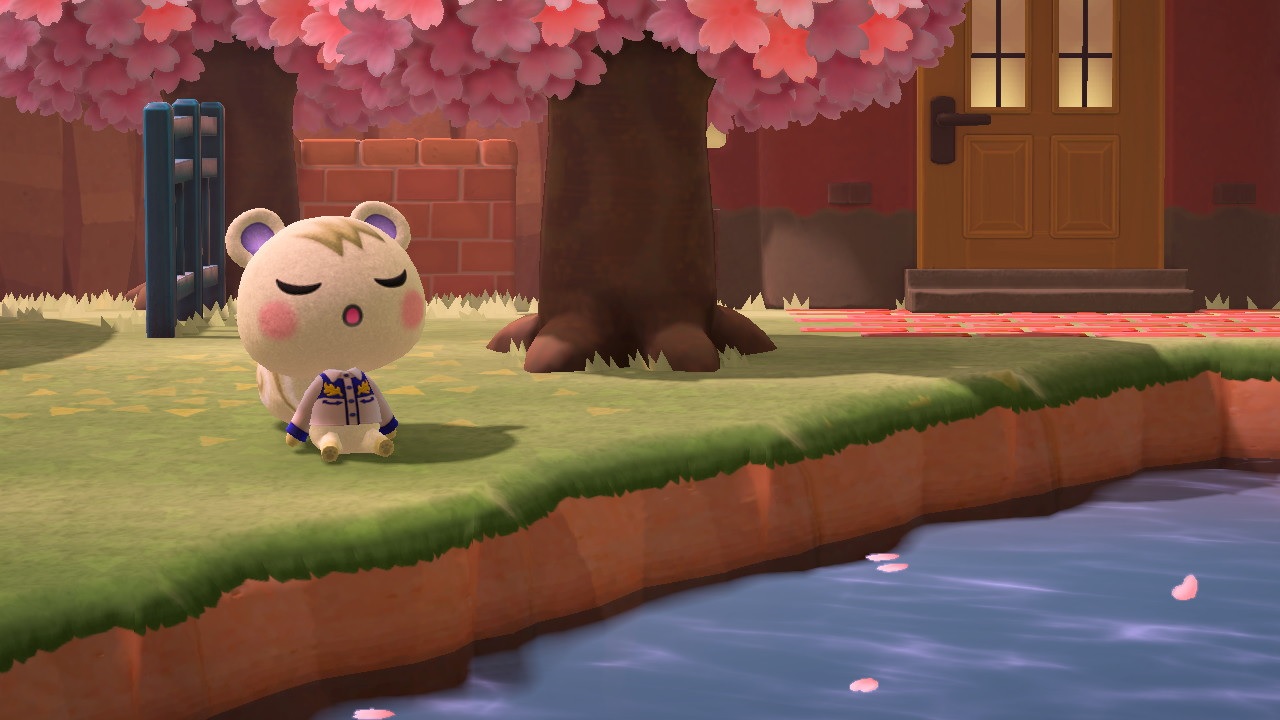 I’m here to tell you today about Marshal. Marshal is a squirrel that could easily be mistaken for a fluffy marshmallow. He’s a little smug, but there’s nothing wrong with being a bit pretentious sometimes! Especially since he’s still so kind to lazy villagers in Animal Crossing: New Horizons. I love him for his pink cheeks, his cheeky demeanor, and the fact that he is super teeny. Look at his little face. Plus, the squirrels do that little upside-down V mouth that is precious. I forced Biff to move out for him!

I’ll leave you with this performance of Marshal singing K.K. Slider’s “Two Days Ago.” – Jenni

All Marshal wants to do is sing “Two Days Ago,” but the butterflies keep distracting him! #ACNH pic.twitter.com/2dafnNNsFt 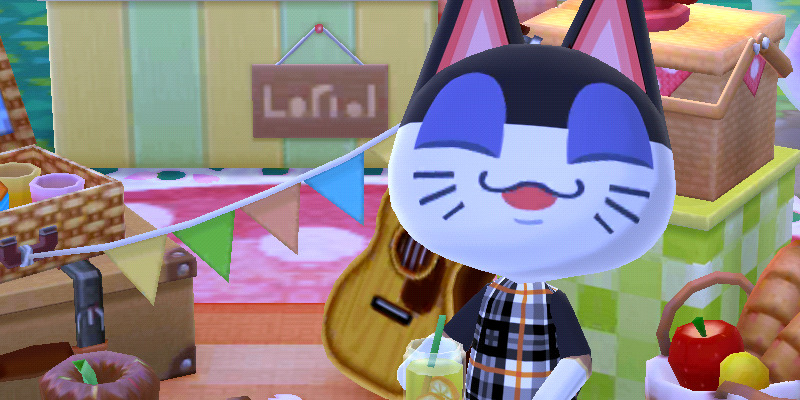 It was basically love at first sight when I saw Punchy for the first time in Animal Crossing: Pocket Camp. Admittedly, I am not a huge fan of Animal Crossing, but when a villager appeals to me I completely understand why people are so invested in the series. Punchy ended up being that villager for me. I love the personality of this lazy, lackadaisical cat and his funny catchphrase of “mrmpht!” While I haven’t encountered him New Horizons, he’s definitely on my list of must have residents! – Kazuma 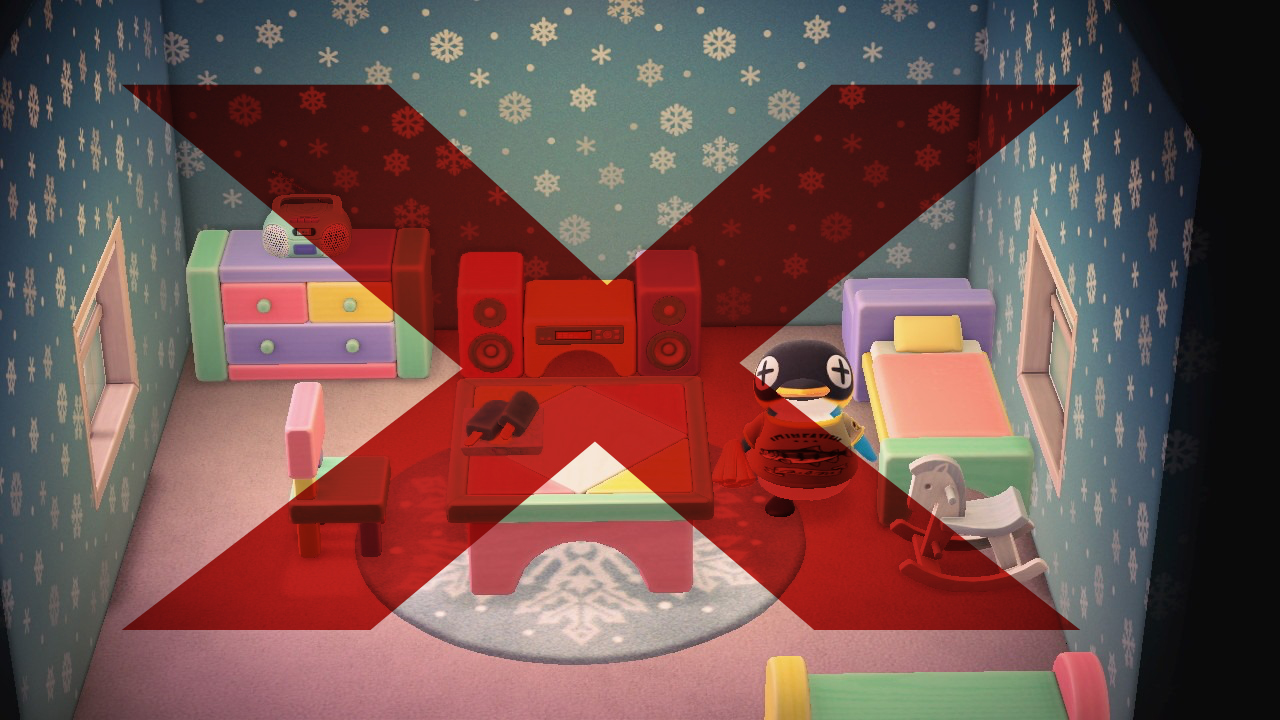 I know this is supposed to be a nice, pleasant piece about how much you love a little animal friend, but it’s a sore subject for me, so I’m going to be real for a second: New Horizons did my boy Cube dirty. Where is all his cool robot furniture? Why does he say “brainfreeze” instead of “d-d-dude” as his catchphrase? What’s with all the pastels? Like even if you’re removing the robo set, there’s way closer stuff to Cube’s taste than what they put in there this time.

And I would know. Cube was my next-door neighbor in my first two Animal Crossing games, and I went out of my way to get him back in every game since. He is my best friend and pal, and Nintendo… did something very wrong to him in this new game. – Graham 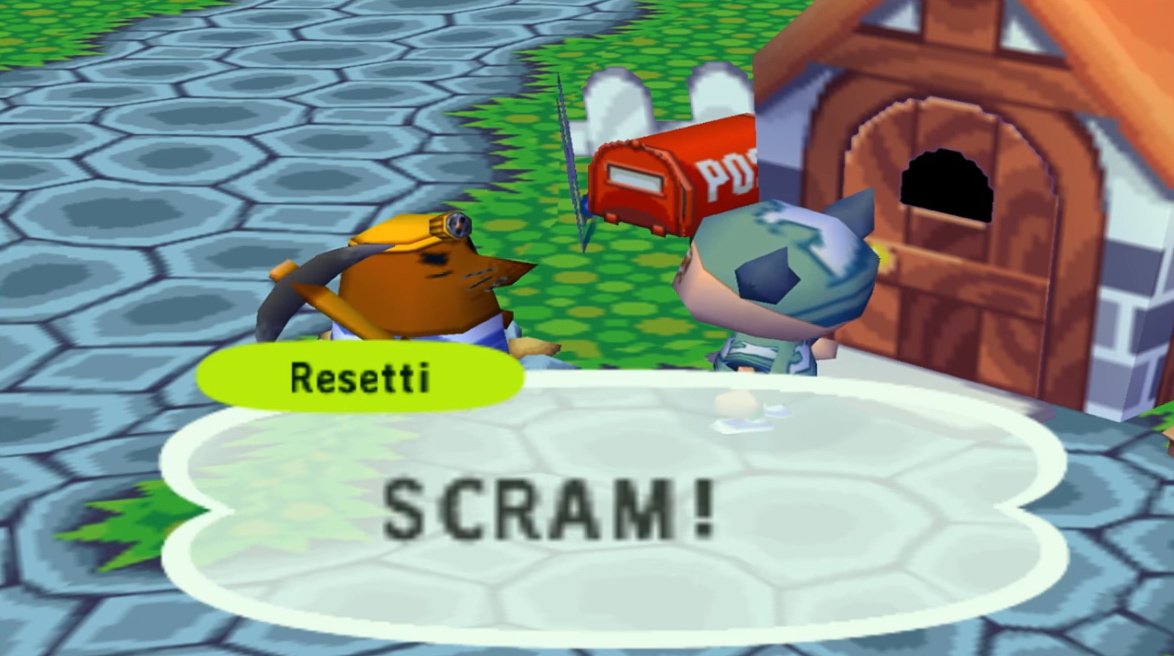 Did you need a little Eternal Darkness in your Animal Crossing? I enjoy it a lot when horror elements work their way into cute things. It adds a little chaotic spice to the mix. Well, Resetti is… unusually aggressive an angry in an otherwise adorable, friendly world. He genuinely made me nervous as well, adding this tiny shiver of fear whenever I turned the game on or off. Did I accidentally forget to save? Did I not do it properly? Was I due to get chastised the moment I turned the game on for failing to save? I’M SORRY, RESETTI, PLEASE STOP SHOUTING!

Or would this be the time he scared me into thinking he deleted my data? That false data wipe, complete with a frightening black screen to make you believe it, startled me terribly in a game I play to relax. That’s good horror right there.

All it needed was for someone to shout “THIS… ISN’T… HAPPENING!” in adorable Animal Crossing speak. – Joel 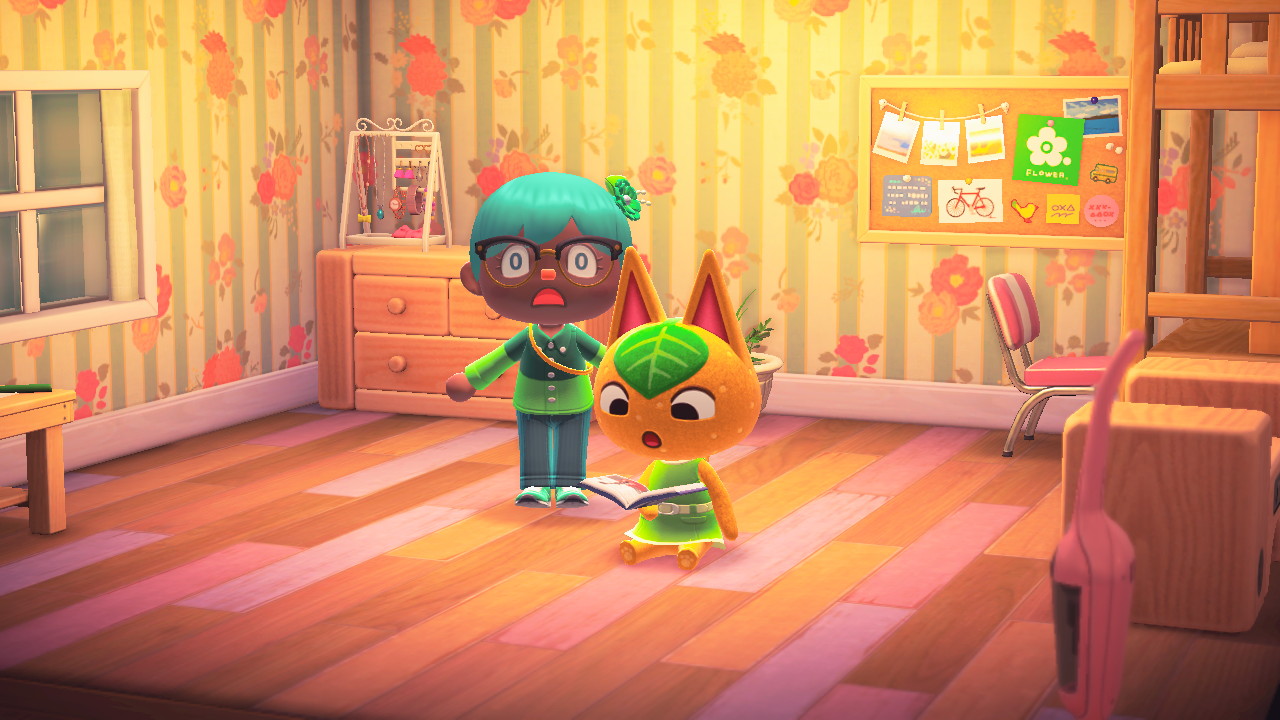 Have you heard about best girl Tangy? Because if you haven’t, I’m going to wax poetic about her.

So, if I’m being honest, I didn’t know about Tangy until Animal Crossing: New Horizons: I honestly thought she was a new character. She was the first villager I encountered while island hopping, and the moment I saw that Nintendo had gloriously mixed citrus with cats, I knew I had to have her. I hate that I’m only just learning about her; I’d have loved to have her in Animal Crossing: New Leaf, and I wish I could have seen her in Happy Home Designer.

Life is better with Tangy. Plus, that leaf on her forehead is perfection!  She’s the Animal Crossing best villager to date. (Aside from my other favorite, Marina!) – Mercedez 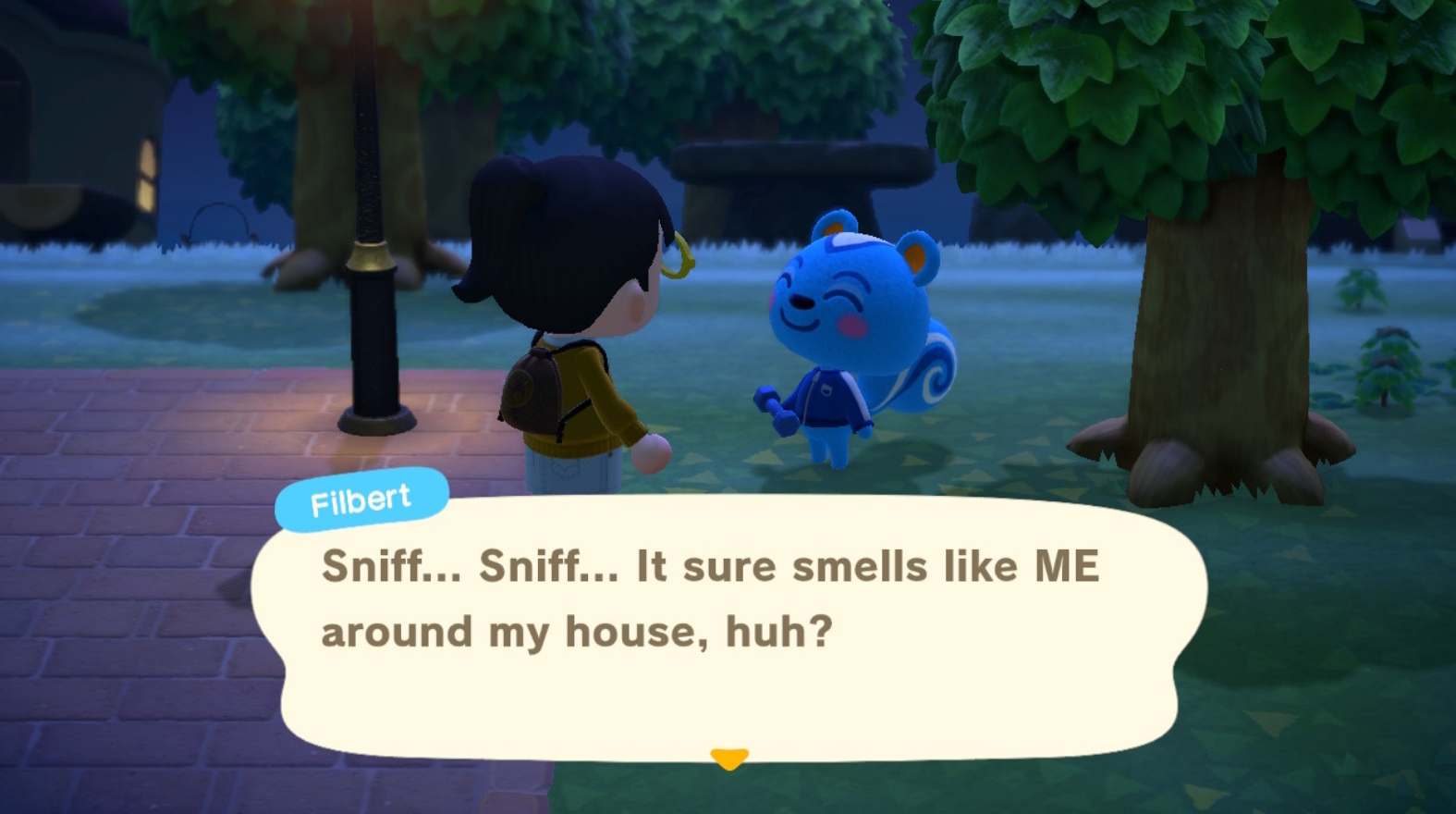 It’s early days for my Animal Crossing New Horizons island colony (I call it “Why-land”), so I don’t have a ton of villagers, or much history with the franchise prior to this entry. That said, I think my favorite villager so far is Filbert, the eccentric blue squirrel. He’s a positive sort of animal person, but never fails to be quirky, either talking about smells constantly, or telling me about new DIY recipes the bugs in his house taught him. Of all the villagers living on Why-land, Filbert’s the one that seems best suited to life here, and I’m all for it. – Josh

Please, feel free to tell us which people you think are the Animal Crossing best villagers too!

Animal Crossing: New Horizons is available for the Nintendo Switch.