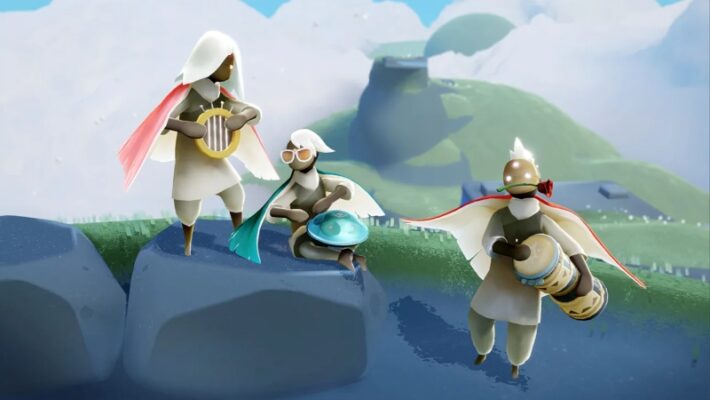 Sky: Children of the Light isn’t technically related to the acclaimed 2013 indie game Journey, but you’d be forgiven for thinking it was a sequel of sorts.

For one, it comes from the same studio: thatgamecompany, and shares many similar visual and conceptual conceits to Journey. You start out in control of a somewhat faceless avatar, and trek across various mysterious environments, equipped with a large cloak that enhances your movement.

You’d also be forgiven if you haven’t heard of the game before. Sky: Children of the Light was first released in 2019 as an Apple iOS exclusive, then made its way over to Android in 2020. Now it’s on the Nintendo Switch, and like its mobile editions, it’s free to download and play.

If there was one criticism of Journey that could stick, it was that the game itself was fairly thin on the sort of mechanical complexity that characterizes most traditional game designs. To some it felt like a proof of concept, as opposed to a final product. By that measure, Sky: Children of the Light feels like that “final product”.

This isn’t to imply that Journey felt incomplete, mind you. Perhaps the better way to think about it is to see Sky as a proving a concept of its own: That the gameplay design of Journey could be expanded upon. Sky: Children of the Light capably holds more features, systems, and activities than Journey did, without compromising that sense of exploration and wonder that made its inspiration so beloved. 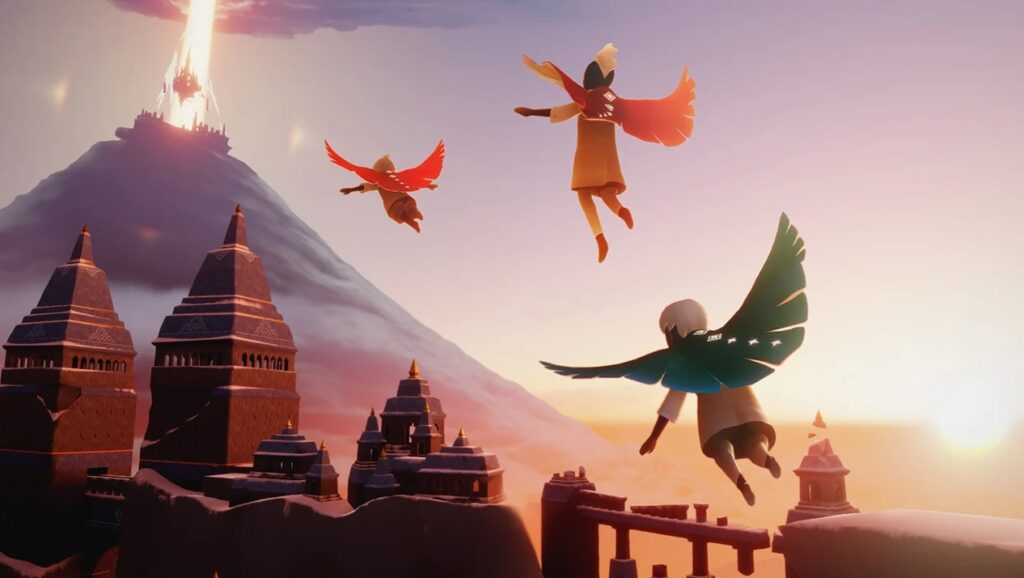 Indeed, the core idea remains largely unchanged. You wake up in a world where the stars – and thus the spirits of the ancestors – have fallen to earth. As one of the titular Children of the Light, you’re given a task. Gather up the scattered light and return the constellations to the heavens. To that end, you’ll explore six large and distinct areas solving puzzles, lighting candles, and inferring stories from poignant tableaus.

The players of Sky: Children of the Light aren’t alone in their quest, though. thatgamecompany has fulfilled its promise to make Sky a “social adventure” game. Jolly cooperation is at the heart of Sky‘s play, and many of the puzzles scattered throughout the world require the involvement of more than one player to complete. While some of these puzzles take familiar forms: For example, a door that needs the weight of two players to push open, Sky‘s approach to social interaction is more unique, and interestingly low-key. 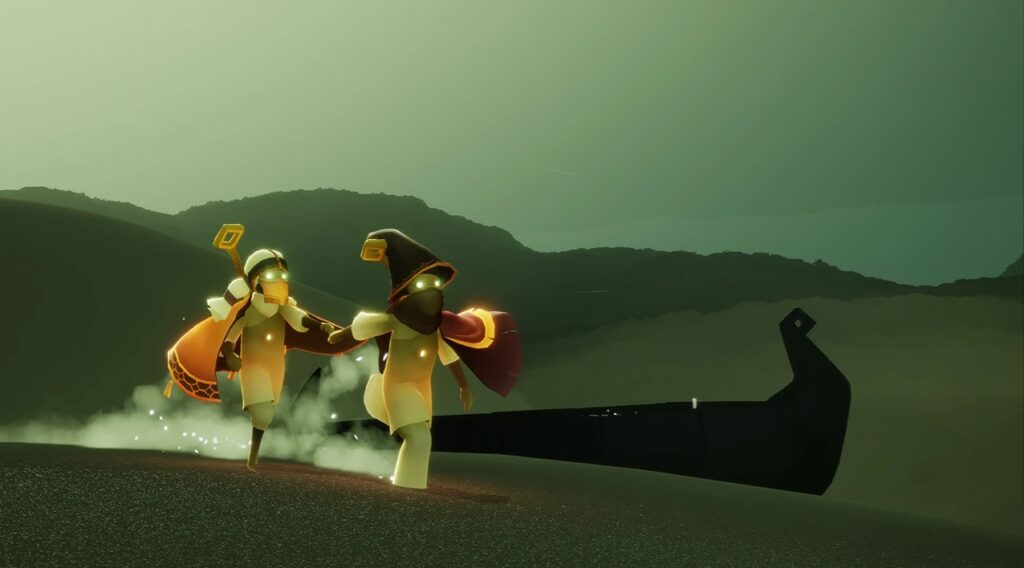 Rather than insisting players find a friend to play with, such as in dedicated co-op games like It Takes Two or A Way Out, Sky: Children of the Light bases its social features around more incidental, ad-hoc encounters. As players go through the game they’ll see the ghostly outlines of other players going about their business, kind of like Demon’s Souls. Unlike Demon’s Souls, though, these outlines can be interacted with.

Players can offer a candle to another to bring them into their game session, interactions like holding hands, hugging, and other “expressions” then become available for use. Text and voice chat are also locked out by default, except when two players choose to sit beside each other on a special, relatively rare, stone bench. This leaves communication to the realm of emoting, and occasionally sending out little musical tones with a button press.

Players can also spend candles (which act as an in-game currency) to “upgrade” their chance partnerships into more permanent friendships. Friends can see and join each other’s sessions more easily, as well as access special expressions. This emphasis on more awkward, indirect communication works in Sky: Children of the Light‘s favor, putting up a mild buffer to hold at least some of the more toxic parts of online gaming at bay, while adding a sense of mystery to any given player encounter. 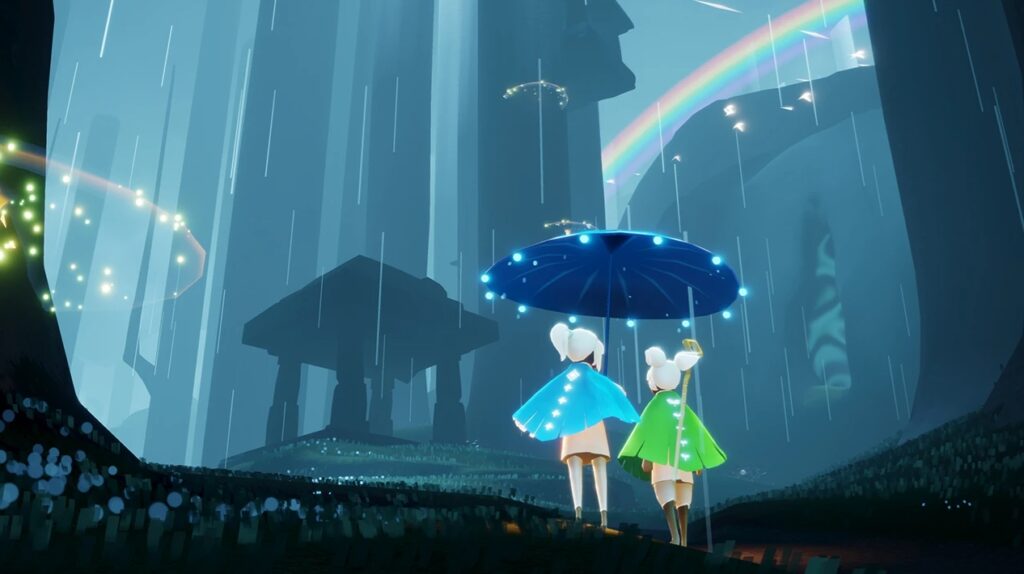 This kind of interaction is also a key component of Sky: Children of the Light‘s business model. As a free-to-play title, the game is supported by in-game microtransactions. Players can access the in-game store to purchase bundles of candles. These candles can be earned in-game quickly enough that only players in immediate need or a great hurry ever need think about shelling out for some. Candles can also be gifted between players, to give a friend (or stranger) a bit of a boost. More limited are some of the cosmetic items available as part of a “pass”-like progression system. Playing the game, and participating in limited-time events earns these items, which can be used to deck out one’s avatar. No purchases ever felt necessary, though, and there’s no real competitive component to the game, so personally, I am not worried about any kind of “pay-to-win” scenario developing.

Sky: Children of the Light is a unique game with an utterly gorgeous look and intriguing social features. I’m not completely sold on its “live game” style of service approach, but the content that’s there is well worth experiencing, whether alone or with a buddy. This journey is less about the long-term experience, and more about the friends we make along the way.

Sky: Children of the Light  is immediately available on iOS, Android, and Nintendo Switch.