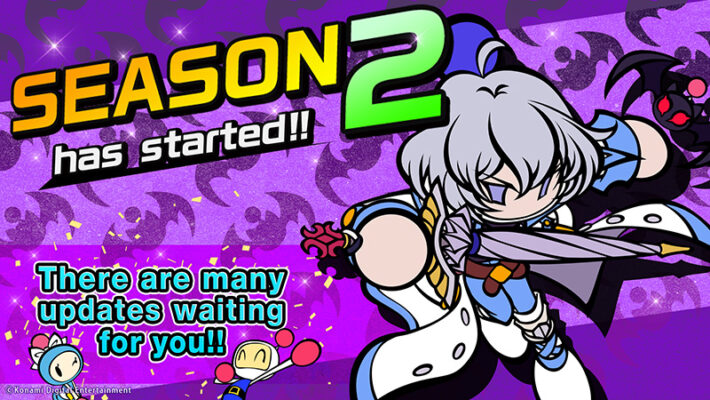 Castlevania’s Soma Cruz is back, but perhaps not in the game people would expect, as he’s now a Bomber in Super Bomberman R Online. Konami announced the second season of the battle royale Bomberman game will include the character and items inspired by the series.

The Soma Cruz Super Bomberman R Online appearance is the most notable addition. People who want to play as him will have to buy him. He’ll be in the shop and not part of the Battle Pass. Is ability is based on his Power of Dominance from his original games. When he sends out bats, he’ll borrow the other Bombers on the field’s abilities.

The Silver and Gold Battle Passes will also both have Castlevania-related items. For example, one Gold Pass outfit seem to be inspired by Richter Belmont’s Castlevania: Symphony of the Night appearance. The other looks like something Maria Renard might wear. There are also two coffin accessories in the Silver Pass. One Silver Pass taunt looks like the Bomber is drinking chocolate milk in a wine glass the same way Dracula would. Finally, there is a Silver Pass icon that looks like Dracula’s castle.

Super Bomberman R Online is available on the Nintendo Switch, PlayStation 4, Xbox One, PC, and Google Stadia, and its Season 2 rollout with Soma Cruz is now available.