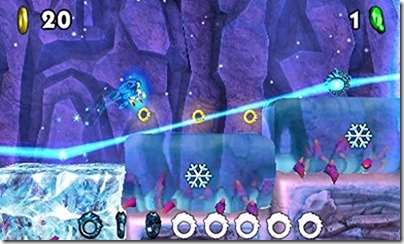 Sega has announced a North American launch edition for the Nintendo 3DS’ Sonic Boom: Fire & Ice. Copies of the game purchased at launch will include a DVD that contains three episodes of the Sonic Boom cartoon.

The Sonic Boom: Fire & Ice Launch Edition’s DVD contains episodes from the first season of Sonic Boom. “Chili Dog Day Afternoon,” the thirtieth episode, follows Knuckles as he attempts to get a specific red pepper for his chili cook-off recipe. "It Wasn’t Me, It Was the One-Armed Hedgehog" is the forty-fourth episode and follows Sonic as he attempts to clear his name after a hedgehog that looks just like him begins stealing things from people around town. "It Takes a Village to Defeat a Hedgehog," the season one finale, has Dr. Eggman, Shadow, and lots of other villains teaming up to defeat Sonic.