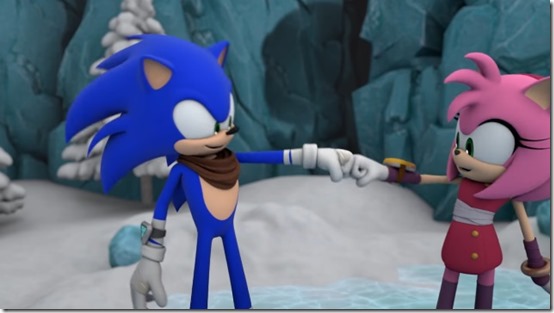 Sega has released an unexpected trailer for Sonic Boom: Fire & Ice. In the almost two minute video, scenes from the Nintendo 3DS game are edited and arranged in such a way that it turns an action game into what appears to be a romantic comedy. Story scenes are interrupted by brief quotes that say things like, “11/10 – Tons of water – NGI” and “This fall, master the element… of love.”

In actuality, Dr. Eggman wants to collect Ragnium and creates a robot to attempt to accumulate it. This robot, named D-Fekt, initially seems broken, but soon becomes capable of altering environments drastically. Sonic, Tails, Amy Rose, Knuckles, and Sticks must use the power of fire and ice, as well as their own innate abilities, to defeat Eggman and D-Fekt and save the day.