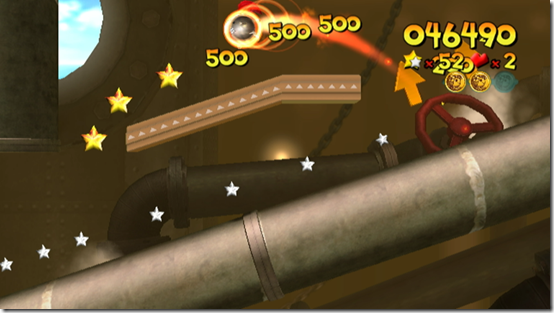 Nintendo had two Wii Motion Plus games on display at E3. I’m sure you heard of a little game called Wii Sports Resort. Span Smasher, a quirky title from Artoon the makers of the Yoshi’s Island games, also supports the accessory.

Span Smasher is a mix of Breakout and a platformer. You control Smasher (well, maybe his name is Smasher Nintendo hasn’t finalized that yet) and swing the remote attached to Wii Motion Plus dongle to crash the orange puffball into bricks. If you don’t move the remote Smasher floats in place so you don’t have to wave the remote up to make him jump and then swing the remote to smash him like a tennis ball. Levels automatically scroll and if you don’t press forward a dragon from the right side of the screen will eat you and you lose a life. 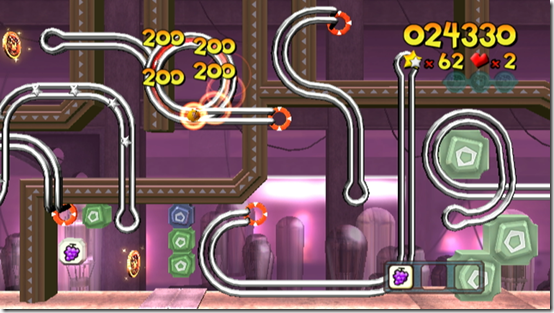 With a simple concept Span Smasher’s success lies on its level design. I got to try two different levels. In one stage Smasher was a metal ball. He can break through most block walls, but sometimes locks blocked Smasher’s path. Touching a key opens locks and prevents Smasher from being an auto-scrolling dragon’s meal. Since Smasher was metallic he could also latch on to a magnet which would carry Smasher a short distance. At the end of the level I was rewarded with a pearl, which is something Smasher needs to save the world.

In the next level Smasher shrank, but he had no problem destroying blocks. Since he was tiny he can ride rails if you knock Smasher into a red starting mark. This level also had rotating pipes that blocked Smasher’s path if you didn’t time your shaking right.

Shaking the remote to make Smasher move was kind of neat. Definitely different and a creative way to use the Wii remote. Wii Motion Plus translated the direction of the swing. So, if you move the remote diagonally Smasher would mimic your motion. However, you can’t wind up and slam Smasher. Instinctually, I kept moving the remote back then forward which made Smasher move backwards (once into the mouth of a dragon!) and then forward. Also, if you shake the remote wildly (gotta test these things!) a message comes pops up telling you to stop doing that.

Span Smasher can also be played without Wii Motion Plus, but it’s unclear how the controls will work without 1:1 motion tracking. Span Smasher also has a multiplayer feature when it comes out whenever Nintendo sets a date.