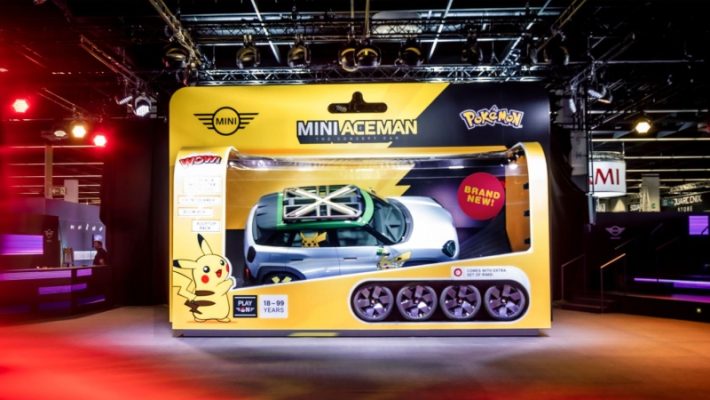 Gamescom may be known for video games rather than cars, but that didn’t stop car company Mini. It showed up in Cologne, Germany with a vehicle linked to nothing less than Pokémon itself. Formally called the Mini x Pokémon Concept Aceman, the electric vehicle is inspired by the legendary game series. Specifically, it’s a Pikachu car, because it’s electric.

The Pikachu car is built on Mini’s Concept Aceman, a concept car meant to spotlight new technologies and design ideas for the future. The Aceman is an all-electric vehicle that uses a “digital interior” with embedded electronics and lighting. The interior also minimizes the use of leather or chrome, instead employing more sustainable materials like recycled textiles. The exterior uses contoured LEDs for lighting, with geometrically modeled surfaces.

Check out a trailer for the Mini Pikachu car below.

The Mini x Pokémon Aceman showed up at Gamescom 2022 wrapped in “packaging”. With Pikachu decals on the surface and a recalibrated UI interface that recalled the iconic Pokémon, the Pikachu car display stand looked like a branded toy crossover more than a drivable vehicle. The Concept Aceman also came with an additional feature: Exterior projection. Fans inside the car could hook up a computer, smart device, or game console to the car and use an exterior projector to display the on-screen image on a flat surface ahead of the car.

As it’s a concept car, the Mini x Pokémon Aceman Pikachu car is not on sale. Future mainline designs may incorporate some of its ideas and technology, though. Meanwhile Pokémon Scarlet and Violet may let players use a less mechanical form of transport: A Cyclizar.