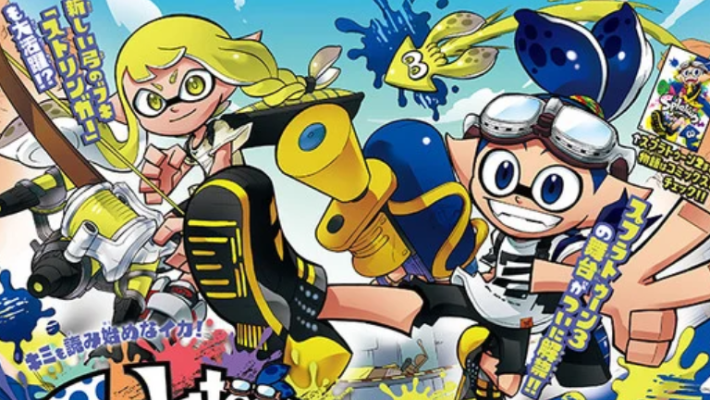 The Splatoon manga has started up again to cover content from Splatoon 3. The first chapter was in Coro Coro Comics magazine’s September 15, 2022 issue. Sankichi Hidenoya remains the mangaka. From the promotional art, it is unclear if Splatoon Bankara will focus on the single-person narrative in Splatoon 3, or if it will be its own story. [Thanks, ANN!]

In Splatoon 3’s single-player story mode, enhanced Octarians appear as enemies. While not exactly part of the plot, the very design of the game’s central hub, Splatsville, conveys a sense of continuity from Splatoon 2. Splatsville is a chaotic city due to how many buildings there are and how many different eras they are from. The reason behind this is that Team Chaos won the final Splatfest in Splatoon 2. Splatoon Bankara could focus on this theme as well for its story as well.

The Splatoon manga temporarily went on hiatus in Coro Coro Comics back in late 2021. At the time, it announced that the manga would return for Splatoon 3. So the break was likely to wait for the game to officially come out. Splatoon 3 launched on September 9, 2022 to great success. It has broken first-three-day sales records in Japan for the Nintendo Switch console, selling 3.45 million units in just three days.

Splatoon Bankara is serialized in Coro Coro Comics, and Splatoon 3 is readily available worldwide on the Nintendo Switch.