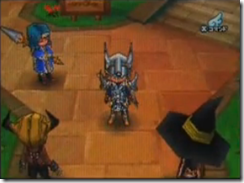 In addition to games like Lara Croft and the Guardian of Light, and Front Mission Evolved, both of which are natural fits for multiplayer game design, Square Enix has been adding mulitplayer elements to their RPGs for the past few years.

Kingdom Hearts: Birth by Sleep has a Monster Hunter Freedom-esque ad-hoc mode. Dragon Quest IX has local Wi-Fi and tag mode, an option where players can passively share treasure maps. And Final Fantasy XIV will follow in the footsteps of Final Fantasy XI, a full-blown MMORPG.