One of Square Enix’s goals for continued growth is to strengthen their own intellectual properties. With the acquisition of Eidos, Square Enix has a ton of them. This slide lists some key IPs for the publisher. 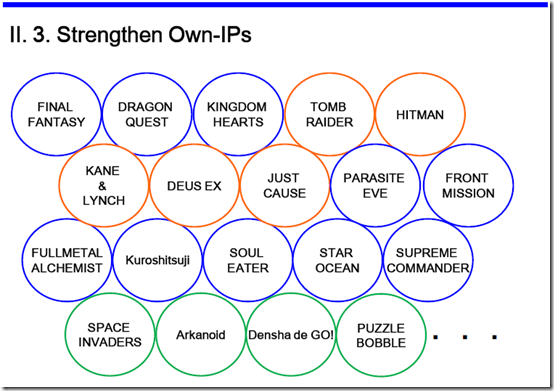 Square Enix franchises are in blue, Eidos titles are in orange, and Taito’s history is in green. Nice to see Parasite Eve high on the “list” even though it isn’t clear if these IPs are ranked in order of importance or not. Manga properties like Fullmetal Alchemist, Black Butler, and Soul Eater are even on the slide. However, the Mana and Chrono series are notably absent. Square Enix plans to pursue cross media strategies for their IPs.

In addition to maintaining series like Star Ocean and Densha de Go!, Square Enix wants to create new AAA brands. Nier was listed on another slide as a “major release” for the current fiscal year. Whether it becomes a new brand or not remains to be seen.

Update: Yoichi Wada, CEO and President of Square Enix, said over Twitter the slide is just a list of IPs Square Enix owns and doesn’t have any other meaning.