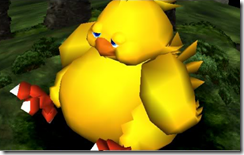 Square Enix has been awfully quiet about future releases, but a chocobo may have slipped out of the stable. Literally. A trademark for Chocobo Panic was filed in Europe by Square Enix. Bastien from French Final Fantasy fan site FFring kindly tipped us about this.

I did a little more digging and discovered Square Enix Japan also owns the domain chocobopanic.com. They purchased it on May 12, 2010 and Yoichi Wada, CEO of Square Enix, is listed as the registrant. The site is emptyn, but a domain name plus a trademark suggest something is up.

We’ll add this to the list of unaccounted Square Enix trademarks, which also has Chocobo’s Crystal Towers and Mindhack on it.