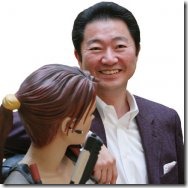 Matsuda joined Square in 2001 as Senior Vice-President according to his profile. By 2004, he had become Director and CFO of Square Enix.