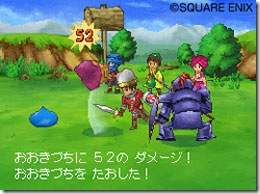 Dragon Quest IX wasn’t playable at Tokyo Game Show. We saw an awesome trailer, but that was it. If you want more information on Dragon Quest IX and possibly play it head back to the Makuhari Messe for Jump Fiesta on December 20 – 21. Square Enix will finally lift the veil on Dragon Quest IX at the show, which is around three months before its March 2009 release date.

In addition to Dragon Quest IX attendees will get to play Monster Hunter 3 and Street Fighter IV at Capcom’s booth. Koei will have the latest games from their Musou/Warriors series. Will Samurai Warriors for the Wii debut here too? Sega will bring a Bleach game, Sony will also have a Bleach game – a PSP Bleach game, and Nintendo will bring their latest products. Jump Fiesta isn’t as big in the gaming sector as other shows, but every year there are premieres. Dissidia: Final Fantasy was playable for the first time at last year’s Jump Fiesta.