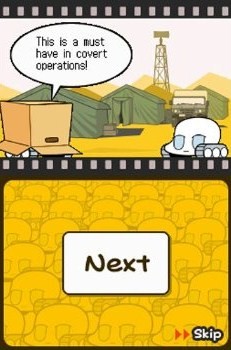 When people think of Natsume, Harvest Moon is usually the first thing to come to mind. It’s understandable, as the company has pretty much devoted itself to catering to the cult classic series of games. Squishy Tank is completely different. It’s a cute puzzle game with a somewhat quirky story. Nonetheless, despite being completely different from the Harvest Moon titles, it’s just as charming and also has a special "something" that makes you love it.

The Squishy Tanks sort-of want to be heroes. It seems like they like the idea of it. In practice, they’re not quite cut out for it. Their idea of handling trouble is to run away. They managed to get their own game though and, as Gunnery Sergeant Jimmy says, the best way to toughen them up is to blow them up. So, you go through the puzzles trying to eliminate similarly colored blocks to try and blow up the Squishy Tanks and make them better soldiers! (Maybe it helps their evasion so they become even better at retreating?)

The best way to describe Squishy Tank is to say that it is a match-3 game you don’t have to think about. There’s no need to group similarly colored blocks together or shift the blocks around. You just look for clusters of red, green, blue, yellow or purple blocks and tap on one of them. All of the connected blocks of the same color will then disappear. 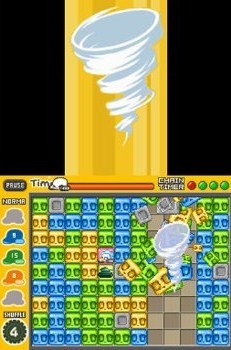 Each puzzle begins with a clear mission or quota, and you have achieve that goal. If you have to clear X amount of blocks, the little colored tanks on the left side of the bottom will have the number of blocks on them that you still have to eliminate. If you have a mission to complete, the top screen will say your goal (for example, eliminate clusters of seven or more blocks 25 times) and keep track of how close you are to completing it.

Aside from the colored, tank-faced blocks on the touch screen, there are also power up blocks. A Baby Tank turns a line of adjacent blocks all one color. A block that has shifting tank-faces will eliminate blocks that are all the same color as the one when you tap it. Tapping a normal Tank will summon a tank to wipe out two horizontal rows of blocks, while tapping a tornado will wipe out three vertical rows of blocks. Finally, there’s a shot to summon the girl tank Nurse Jane, who will refill the timer for the level you’re on.

Squishy Tank is also quite accommodating because it has so many different game modes. The main Story Mode is somewhat short, and contains four chapters with funny little story segments starring the tanks between puzzles. Survival tests how many blocks you can eliminate without failing, Time Attack is a timed endeavor and Quest Mode has you trying to achieve certain goals to earn costumes for your Squishy Tank. There’s also a Tutorial, in case you ever forget how to play. 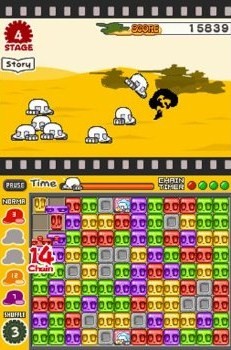 My favorite area had to be the Collection section. Think of it an Omake extras page. You can view the skits from the Story mode here – which I recommend because they’re really quite cute and clever – with the Story Viewer. You can also customize a tank with the costumes you’ve collected in Quest Mode, then torment and tap your dressed up Squishy Tank to make him complain and (maybe) explode. Finally, there is a Mini-Game Center which contains all the Squishy Tank mini-games you’ve unlocked from Story Mode. These are all short shooting games called "Squishy Combat", "Squishy Combat 2" and "Squishy Combat 3". The first has you trying to shoot the tanks, who are hiding behind objects and trying to run away. The second has you shooting tanks that are diving in. The final game is cutest, and an odd take on Space Invaders. Instead of trying to attack advancing tanks, you’re trying to destroy them all before they back up and escape.

Sometimes you want a game where you don’t have to think. Where you can pop it in, play for five, ten or maybe even thirty minutes, then walk away. Squishy Tank is that kind of game. It’s cute, affordable and has sufficient replay value. I’d especially recommend it for a casual gamer – they’ll be enchanted by the adorable tank characters and find the gameplay easy to grow accustomed to.