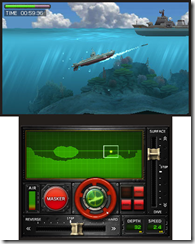 Steel Diver, a newly announced game for the Nintendo 3DS, isn’t so new. This game began its life as a tech demo shown at E3 six years ago.

“Development of that project [Steel Diver] is moving along quite nicely, it’s far along at this point. It’s almost complete. The reason for that is we’ve been working on it for the last six years,” Shigeru Miyamoto, General Manager of Nintendo EAD, revealed in a small press session. “When we first started the Nintendo DS, at E3 six years ago, we showed that game as a tech demo, submarine game.”

“It was very well suited for the touch screen. The submarine would slide to the right. You could manipulate all of the levers on the touch screen. It has a very unique feel. So, we really liked it on the original DS and we spent time working on it gradually over the years,” Miyamoto continued.

Steel Diver development continued as a regular Nintendo DS title and it was, according to Miyamoto, “pretty far along.” Nintendo changed platforms after receiving the screens for the Nintendo 3DS. “Once we got the 3DS screens we decided this is something that could really take advantage of the 3D graphical effects and we wanted to see it on a 3D screen.”

“So, it’s almost like you have a little submarine pet in your aquarium at home,”  Miyamoto joked.