5pb’s popular visual novel Steins;Gate has already been adapted into an anime and a movie, but next, a stage show adaptation is coming to Tokyo on October 12. 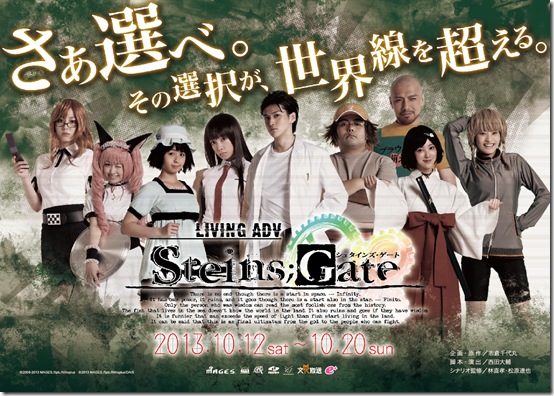 Titled Living ADV: Steins;Gate, there will be seven shows held until October 20 at Tokyo’s Zepp Diver City. The first six shows will each have a story that branches off into a different route, five of which are centered around one of the heroines. The following six shows will each cover a route voted on by subscribers of D-Mail, the production’s official e-mail newsletter. The last show’s route will be voted during the actual show by audience members via cell phone. The evening show on October 12 and 16 will also feature a musical performance by Itou Kanako and Ayane, respectively.

To get a better look at the actors, you can view the trailer below: