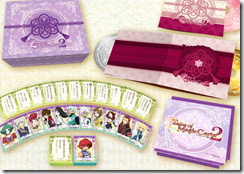 While talking about Tales of the Abyss for the 3DS with Nintendo president Satoru Iwata, Tales series producer Makoto Yoshizumi talked about the rise of female fans.

From surveys, Yoshizumi said 70% of the people that play Tales games are male and 30% are female. However, at stage events designed for fans, 95% of the attendees and goods are purchased by female customers. Iwata commented on the extreme difference in the market, which also surprised Yoshizumi at first.