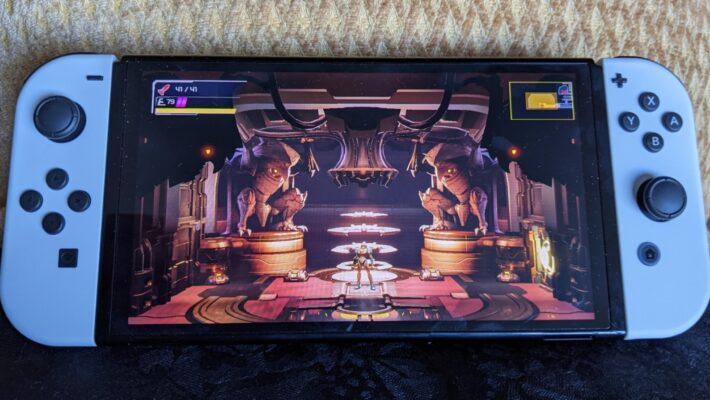 When it comes to Nintendo hardware revisions, it’s usually pretty easy to see the major changes. With the Nintendo 3DS, we saw a larger than usual 3DS XL, a 2DS that removed the 3D functionality and clam shell, a 2DS XL that brought the clam shell case back, and a New 3DS with slightly more power, 3D, and the ability to scan amiibo. In October 2021, Nintendo introduced the OLED Switch, its third take on its latest console. Like the 3DS XL or New 3DS, it feels like an opportunity to address certain quality of life features. This is especially true when it comes to its Handheld and Tabletop modes.

A bit part of what makes the Switch appealing is its hybrid nature. Being able to play it on a big screen or anywhere is convenient. And most of the Switch OLED selling points promise to make that better. In the case of the OLED screen, it’s immediately noticeable from the moment the system’s turned on. There’s a crispness that the original Switch lacks. The colors feel more true. Things seem more distinct. Granted, it isn’t going to make the incredibly tiny fonts in certain games easier to read. (I’m looking at you, Fire Emblem: Three Houses.) But the vibrancy is unmistakable. 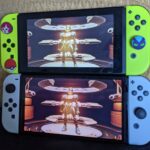 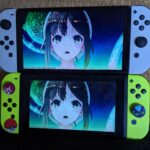 Now, granted this will be more noticeable in some games than others. For example, Metroid Dread is a good showpiece for it. There are areas with varying degrees of light presence. Plenty of fine details come up, with the sharper and higher quality screen calling attention to it. And since the shades of black seem truer and deeper, you get a better sense of contrast. Meanwhile, when I loaded up Atelier Ryza to take a quick peek, the opening animation didn’t seem as shockingly different. Naturally, the gameplay itself did.

The audio, likewise, sounds crisper. The positioning of the speakers are front facing. They’re slightly larger than before. They aren’t obscured by a player’s hands or a table if in Tabletop mode. It’s satisfying and clear. Things were fine before, but they do sound markedly different now. It sounds like they are positioned in such a way that the sounds are more clearly aimed at the person playing.

What’s also nice are the little things that come up during general use. The alterations that come up when you use a Switch in Handheld mode often. The recessed power button is slightly larger, making it easier to find and press. The volume toggle is slighting larger and longer, with a bit more of a gap between it and the power button, which makes controlling the sound easier too. Rather than putting the bar code and serial number on the bottom of the system, which I will say absolutely fades off after four years of regular use, it is hidden under the new, longer stand that extends to the full length of the system. Removing the microSD card no longer requires someone to hope they have nails of a certain length, because that is positioned horizontally and is slightly recessed. It’s more accessible, only requires a brief push, and ejects the card into that slight plastic well so it doesn’t rocket off onto a desk or perhaps floor. 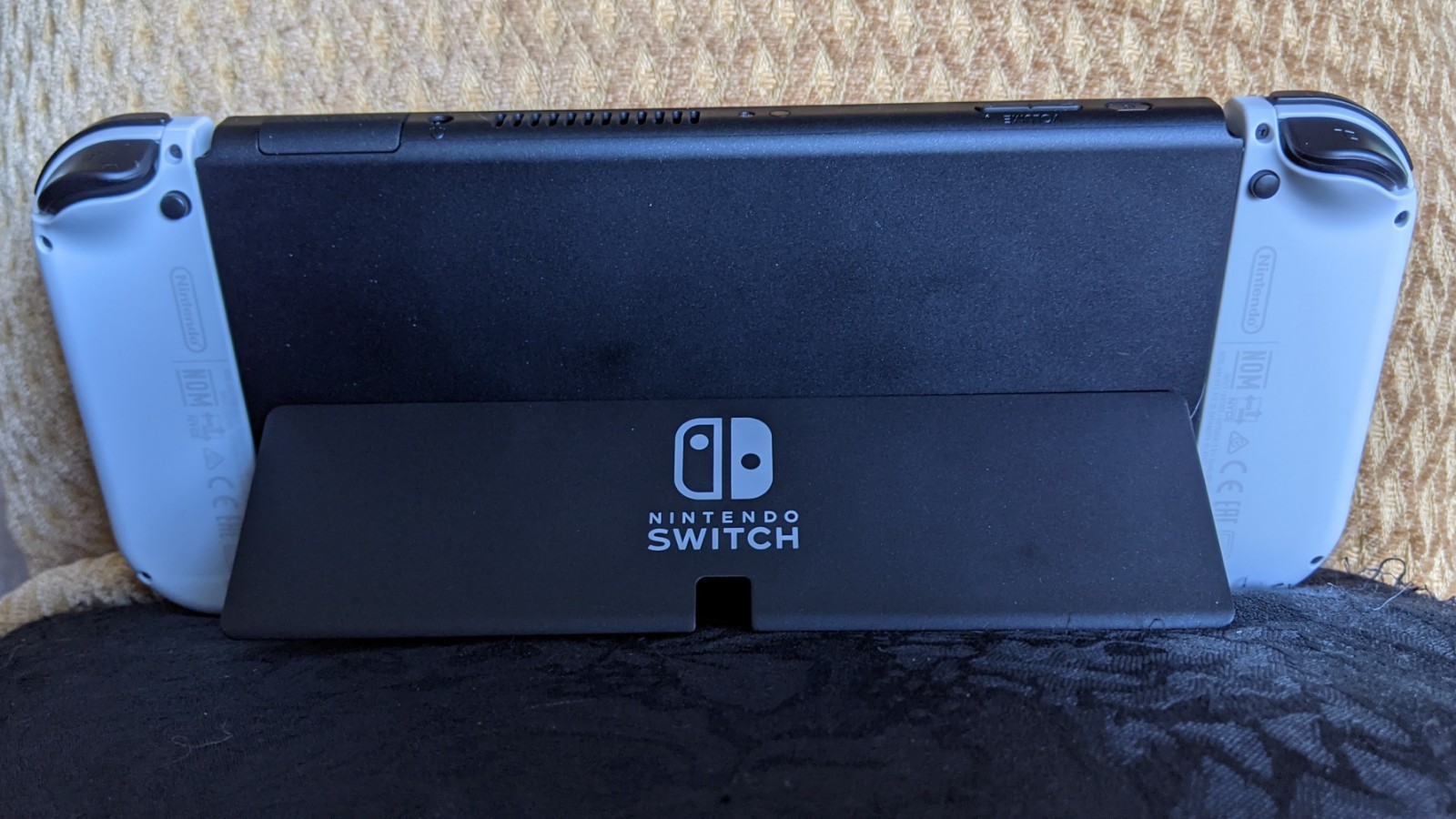 I’m also a bigger fan of the new kickstand than I expected. I don’t often use the Switch in Tabletop mode. Typically, it only came up for Jackbox Party Pack sessions before the pandemic. But when I started playing Knockout Home Fitness, I would often prop my original model up on my coffee table with the stand rather than attempt to exercise in my smaller bedroom where the Switch dock is located. It would often fall, due to movement in the room. Not to mention that, with age, that skinnier kickstand had gotten loose and wouldn’t stay flush with the console. The wider kickstand on the Switch OLED is much more stable and secure. (Especially during workouts.)

The sole Docked incentive is, well, the new dock. The Switch OLED comes with a version that includes a wired LAN port for an ethernet cable. Which means a stronger and more stable internet connection. Of course, that also only means improved performance if, well, the people you’re playing with are using the new dock and are directly plugged in as well. But when I played Rocket League and Super Smash Bros. Ultimate, things seemed stable enough.

As for if the Switch OLED model is worth buying, I would say the answer depends on a number of factors. If someone doesn’t own a Switch at all, I would recommend it as a good first purchase. Especially if they intend to play in Handheld mode fairly often. It is a markedly better experience. Should someone already have a Switch, the answer might come down to how long they have it and how often they use it. My original Switch is a launch model. The battery life is a fraction of what it once was. I’m on my second set of Joy-Cons due to drift. 80% of the time, I’m playing in Handheld mode. This upgrade is exactly what I needed for a number of reasons, and I think people in similar situations would benefit from it. Daily Genshin Impact sessions aside, this is my primary console. Someone in a similar situation would likely enjoy similar benefits. But if a person primarily plays the system while docked and isn’t constantly using it, they might benefit more from buying the OLED model’s dock alone from Nintendo once it is available separately online.