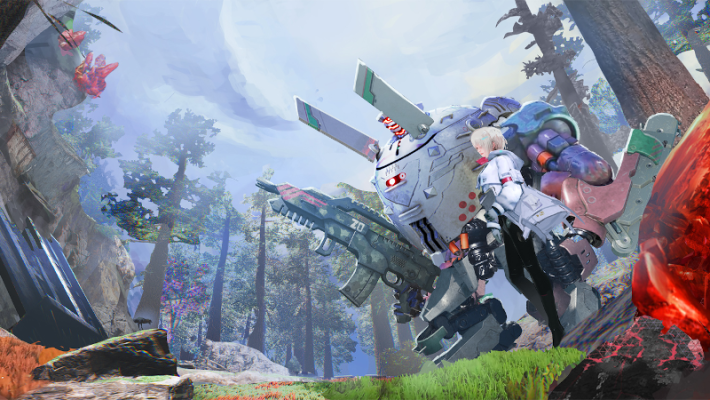 Bandai Namco published more details about Synduality at its final TGS 2022 live stream. The company first unveiled the title as a new game globally via the September 2022 State of Play program. This stream further revealed that the franchise will also have an anime show taking place after the game’s storyline.

While the game will have a customization system for the player’s Cradle Coffin mech, the producer Yosuke Futami revealed that each player will also receive a personalized Magus AI with a unique personality.

The team also revealed the main characters who will appear in the Synduality game by default. The story will tell the tale of Alba Kuze, a Drifter who pilots a Cradle Coffin named Bowie Rabbit while being accompanied by the Magus AI Ada. Yuya Hirose and Yui Ishikawa will provide Japanese voiceovers to the game’s protagonist and heroine.

The stream revealed that Synduality will be a media-mix project consisting of not only a game but also an anime show and a lineup of merchandise. The large-scale project has been under development since at least 2017, when Bandai Namco called Neco and Ippei Gyoubu—the character and mechanic designers, respectively—to join the team.

Eightbit is working on the anime adaptation, and Bandai Namco Filmworks will publish it under the Emotion brand. The anime show will take place in 2242—twenty years after the game’s story—and it will star three different Magus AIs: Noir (voiced by Aoi Koga), Ciel (Nagisa Aoyama), and Schnee (MAO). Meanwhile, Bandai will also release plastic model kits of the Cradle Coffin mechs that appear in the franchise.

The Synduality game will release for PlayStation 5, Xbox Series X, and PC in 2023. The anime show will air on TV Tokyo and other Japanese television channels, but Bandai Namco has yet to specify when it will start airing.