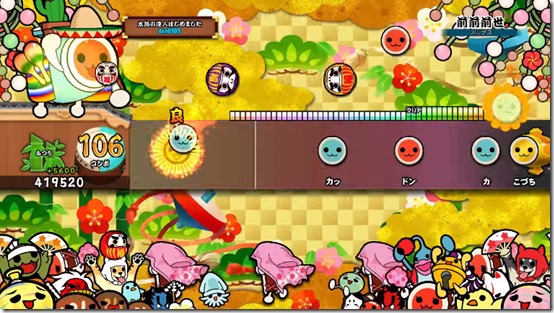 Taiko no Tatsujin: Session de Dodon ga Don! features over 70 tracks with both single and multiplayer modes. One new feature is a “Friend Session Performance,” where you can play against the data of your friends.

The “Guest Session Performance” lets you play with popular guest characters such as Doraemon, Hello Kitty, Hatsune Miku, Pac-Man, or even Heihachi from Tekken and many others.

The game will go for 6,100 yen plus tax for the regular version, or a bundle with the drum and sticks for 9,980 yen plus tax. There’s also a digital Deluxe Version for the game for 9,288 yen plus tax, featuring the Season Pass.

The Season Pass features new tracks for the game, with Pack Vol. 1 releasing on October 26. There will be a new volume each month until March 2018 for a total of six music packs, which you can get for 540 yen each or the Season Pass for 2,700 yen.