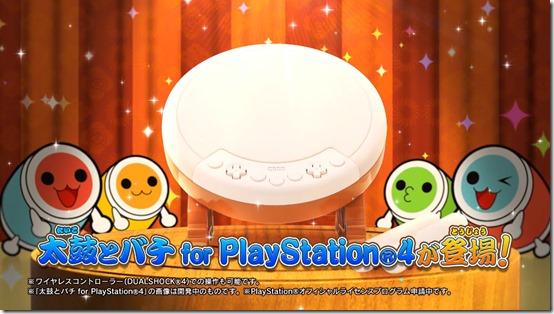 Taiko no Tatsujin hasn’t been on PlayStation since V Version on PS Vita, and its latest title brings over 70 tracks including Your Name’s theme song “Zenzenzense” by Radwimps and more to PS4.

In addition to a look at the taiko controller by Hori, the teaser trailer gives us a first look at Taiko no Tatsujin: Session de Dodon ga Don! footage while highlighting its local multiplayer feature to feel like you’re playing the arcade game at home.

The game also introduces a new feature that lets you play alongside a friend’s “ghost” or performance data. There’s also a new “Guest Session Performance” feature that lets you have sessions with popular characters such as Doraemon. You can read more about that and confirmed tracks for the game in our previous report.

Taiko no Tatsujin: Session de Dodon ga Don! has a 2017 release window in Japan for PlayStation 4 but last we heard its development was 80% complete, so it shouldn’t be too long until we get a proper release date.