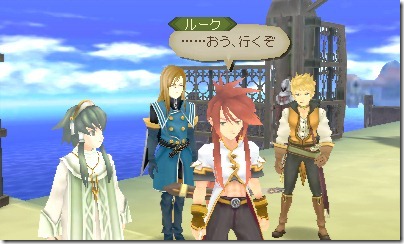 In a recent Iwata Asks interview, the producer of Tales of the Abyss, Makoto Yoshizumi, states that the games in the Tales of series has always been in a precarious balance. Reflecting upon the series, he says that, on one hand, it was always important to know your fans.

Yoshizumi would be present at game stores on opening day, standing there anxiously and watching the games leave the shelves, case by case. He would observe the customers, and note what the people wanted, what they bought, what they would like, and what kind of people they were.

(Usually it would be teenagers, but sometimes it would be moms buying for their kids, and dads trying to peer at a name on a little piece of paper.)

But just going by what the fan requested was the safe route. To surprise them, the creators would have to take risks. The games needed to be special, to stand out. For example, during the era the first game in the series was released, it was enough to create a game that had voices and songs (which was impressive, given the specs of the systems available at the time) such that it sold relatively well despite being released at the same time as Dragon Quest. While the number wasn’t extremely high, the data showed that those who played were very interested in it, Yoshizumi noted. 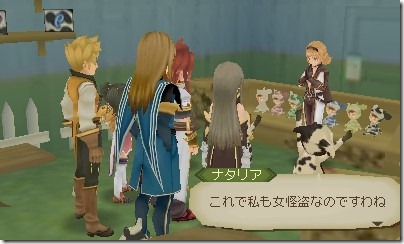 To determine what to change, it was first necessary to determine what defined Tales. According to Yoshizumi, this was the characters. According to him, players should be able to empathize with everyone in the games — even the enemies. No, especially the enemies. The villains aren’t pure evil, Yoshizumi believes. They’re fighting for their own beliefs just like the heroes are. Everyone is multi-faceted and flawed, making them and the world believable. To make them more relatable, Yoshizumi made sure to make their ideas ones we, in the modern world, could relate to and understand.

Ironically, Yoshizumi doesn’t completely consider Tales to be an RPG. The series isn’t about role-playing, he says. The player isn’t playing with the protagonist as their “alter ego,” but rather he or she is playing to learn about the characters and to watch them change and grow (he termed this “Character Playing Game”).

This is actually the reason that each game in the series is assigned a “______ RPG” genre (for example, the genre of Tales of Symphonia is “an RPG that resonates with you” and Tales of Vesperia is “the RPG in which ‘Justice’ is enforced”). Yoshizumi doesn’t feel that the games were quite like the usual RPGs, and while he’d love to call them something else, using a term other than RPG would just induce confusion.

In his words, “Everyone calls it an RPG, but it’s really not, so I’m sorry [for tricking you].” 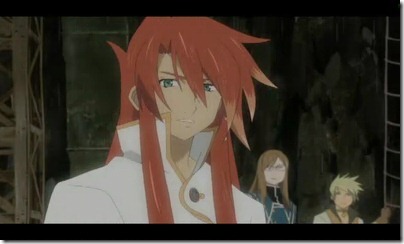 As for Tales of the Abyss, that’s “an RPG where one learns the reason for one’s existence” (or simply, “to learn the meaning of one’s birth” RPG). It’s a game about discovering yourself, Yoshizumi says. Back during its first release in 2005, the Tales series was celebrating its 10th anniversary, so Yoshizumi decided to take a little risk. He made the protagonist of Abyss someone who was very selfish and annoying in the beginning. Someone who most players would probably hate, and, over the course of the game, turned him into someone likeable, that the rest of the party would look at and come to say, “Huh, Luke’s not that bad.” The progression of the story followed the same pattern.

While they knew that this would drive away many a player, Yoshizumi hoped that those who continued through the game would love the game all the more because of this growth. He didn’t want a story where “the fated protagonist had a perfect life and a perfect upbringing, and he grew up to defeat the demon king.” He wanted a story with a party that consisted of flawed characters. Abyss, in particular, is filled to the brim with such characters — ones who act stupid, but are actually hiding something or
ones that look cute, but actually have a connection with the enemy.

Because this was the installment that everyone put the most effort into, Yoshizumi urges new and old players alike to try it on the Nintendo 3DS.