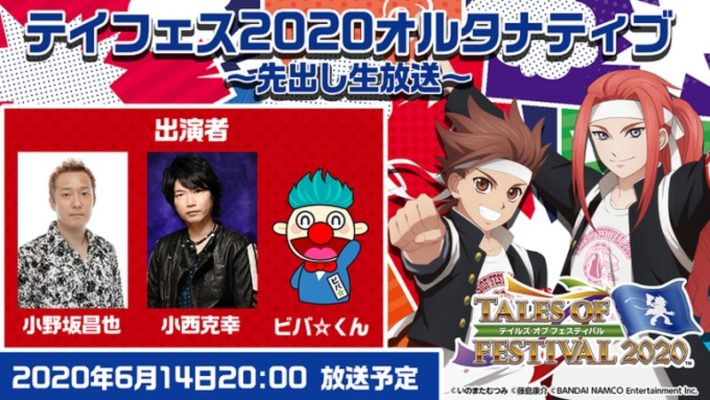 We’ve known for a while that Tales of Arise is on the way, although whether or not the COVID-19 pandemic has affected its planned 2020 release is still unknown. We’ve also seen upcoming mobile games Tales of Crestoria hit with a slight delay, for obvious reasons. As many other events in, around, and outside of video games have been postponed and cancelled, so too has the Tales of Festival for this year. Instead, Bandai Namco will be having a more fun-oriented Tales of Festival 2020 stream later this month on June 14, 2020. Then, a more substantial event is set to run on March 7, 2021. [Thanks, DualShockers!]

The Tales of Festival 2020 stream is meant to be more of a small-scale, fun event for the fans. Bandai Namco is already ahead of the matter, saying folks shouldn’t expect big news or announcements from the stream. Hosting the stream will be voice actors Katsuyuki Konishi and Masaya Onosaka, the talent behind Tales of Symphonia‘s Lloyd and Zelos, respectively. The stream, which already has a spot on YouTube counting down to go time, seems to be more of a chance for the Tales of fan community to get together and celebrate the 25th anniversary of the series.

We haven’t heard much about Tales of Arise since the 2019 Tokyo Game Show, but as of this writing Bandai Namco is advertising a 2020 release window for the Xbox One, PlayStation 4, and PC RPG.