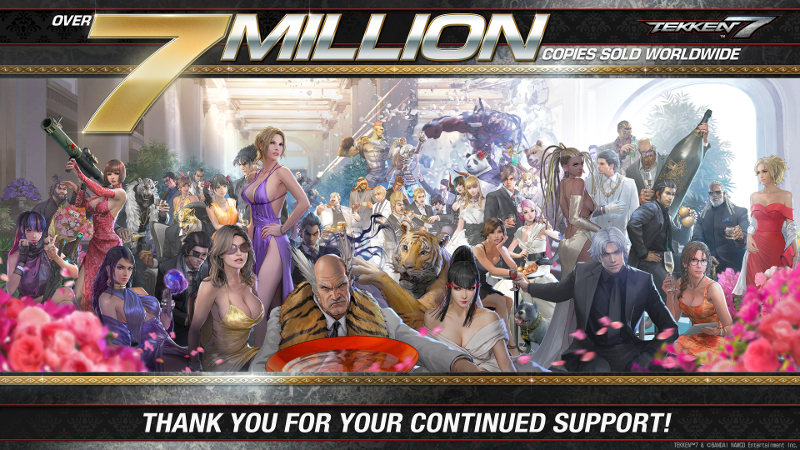 The original illustration was made for the 3 million mark reached in October 2018. It was gradually expanded to include additional DLC characters when Tekken 7 reached the 4 and 5 million marks in July 2019 and February 2020, respectively. The 7 million milestone further updated this drawing by adding both new characters from Season Pass 4, Kunimitsu and Lidia Sobieska.

TEKKEN 7 had achieved Over 7 million sales !
Season 4 characters are added to the commemorative illustration.

The previous milestone reported for Tekken 7 was 6 million copies sold in September 2020. The 6 million milestone came with a new illustration that depicted the title characters conferencing remotely to reflect the real-life global lockdown measures caused by the pandemic.

The fourth season pass for Tekken 7 concluded with the additions of Kunimitsu and Lidia, as well as the Vermilion Gates and Island Paradise stages. When asked about the possibility of adding another new season pass, Harada answered that he doesn’t know about the future. Bandai Namco originally intended to end content additions after Season Pass 2, but the changing market situation led to the release of the third and fourth season passes.

Tekken 7 is immediately available worldwide on PlayStation 4, Xbox One, and PC.