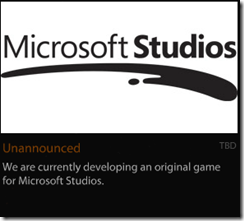 The title popped up in Australia’s Classification Board with Microsoft tied as the publisher. On their website, Iron Galaxy lists an original game for Microsoft Studios as one of their projects. They’re also working with Twisted Pixel, 2K Games on a “tech-heavy project” (earlier they made Bioshock 2 DLC), and Capcom on an unannounced title. Iron Galaxy actually has a long relationship with Capcom going back to the Bionic Commando reboot and Dark Void where they were support staff.

Speaking of Microsoft Studios, they also something called Chop in the works, which sounds like it’s tied to Kinect. Perhaps, it was a work in progress name for Junk Fu?