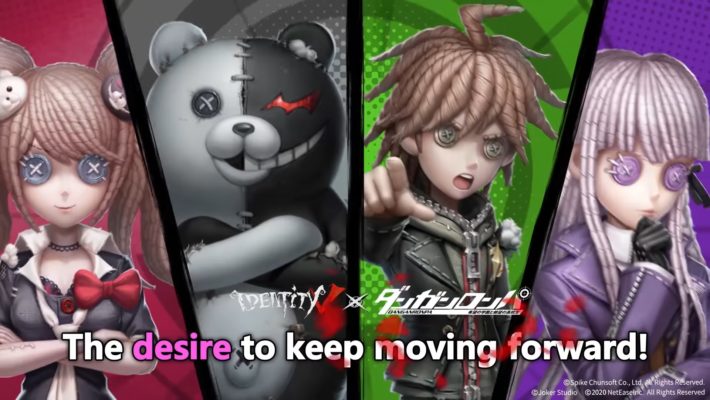 The Danganronpa Identity V crossover is now live. The event was first announced back when the mobile ports of the three Danganronpa entries were revealed, and it is now active in Identity V worldwide. Monokuma has been added as a Hunter, while Junko Enoshima, Kyoko Kirigiri, and Makoto Naegi from the original game are available as Survivors.

The voice actors for the four characters were revealed in a video on the official Twitter account. Each person is reprising the role. Junko’s voice actress is Megumi Toyoguchi, Kyoko is Yoko Hikasa, Makoto is played by Megumi Ogata, and Monokuma is Tarako “TARAKO” Isono.

Here’s footage of all new additions to the asymmetric horror game. As a reminder, this is a 1v4 game, so there would be one person playing as a Hunter (Monokuma) and the other four people would be Survivors trying to escape the Hunter. Each character is a “skin” for an existing character. So Monokuma is another costume option for Bonbon, who is also known as Guard 26. Junko is an option for Demi Bourbon/Barmaid. Kyoko is a Martha Behamfil/Coordinator outfit. Makoto is a skin for Lucky Guy/Deduction Substitute.

Here’s another tweet with a video clip looking at all of the Danganronpa Identity V characters.

Emma just slinkingly took a video of the crossover characters in the test server. Let’s take a look at their handsome behaviors.

(The costume display is not the final version, please wait for the launch date to check in-game.)#Emmaknowsnothing pic.twitter.com/zXaZddEcuK

This isn’t the first time another game has popped into Identity V. In a past crossover, Persona 5 characters were added to the horror game.