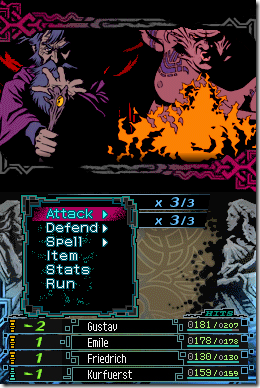 The Dark Spire, Atlus’s latest DS dungeon crawler, may not be for everyone, but for people who enjoy games like Etrian Odyssey 1 & 2, it’s a logical next step. The game’s heart-thumping soundtrack and highly stylized visuals add to the solid Dungeons & Dragons based ruleset.

After rolling (more about that later) a party of adventurers or using the pre-made ones, and a short tutorial on the basics of dungeon crawling, players are thrust in front of the Tower and will need to make their way painstakingly up higher and higher floors. Players must resign themselves to the fact that there will be deaths. A lot. Especially in the beginning.

A prominent difference between the Dark Spire and the Etrian Odyssey games is that the Dark Spire is based on the D&D ruleset. When a character is created, each stat (strength, intelligence, agility, etc.) must be rolled for, which is simulated by pressing a button on some quickly changing numbers. Also in line with D&D, a character’s defense depends on his armor class. A lower armor class means a higher defense, which is why equipment that have negative armor class are good to stock up on.

Players who are used to the conventional RPG’s like Final Fantasy will be shocked to find out that spells like healing don’t always heal for the same amount. Each time a heal spell is used, imagine dice being rolled; sometimes you’ll heal 17 points and sometimes you’ll only heal 2 measly points. 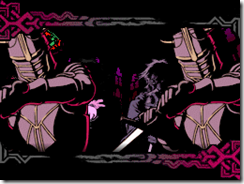 Members in a party accumulate their own experience point total. Once they reach a certain amount, they can level up in their primary class or gain levels in other non-restricted classes. Each time a class level is gained, characters also gain max HP, but like most other things, how much you gain depends on a roll of a die. Members can also learn skills like dancing and lock picking, which greatly help in dungeon exploration.

It’s the customization aspect of parties which really makes the Dark Spire enjoyable. Dungeon exploration and collecting loot is fun and all, but I don’t really feel attached to my party unless I custom tailor each character from their stats down to what spells they can have.

A couple tips which will make your exploration of The Tower easier: