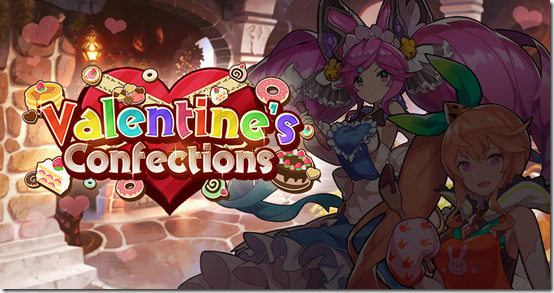 In Dragalia Lost at the moment, two sorts of limited-time events have been introduced. One is the raid event, where four players bring in their whole team of characters to fight a boss, and the other is a facility event, where you complete missions to get items to build up a facility. Now, a third sort has been introduced. The first Dragalia Lost story event, which is called Valentine’s Confections, will begin on February 13, 2019.

Valentine’s Confections is a Valentine’s Day event. Certain characters will have stories available for a limited time. To unlock and read them, you have to go through main and event quests. These will reward people with event items, in addition to normal rewards. You can then invest the special Valentine’s items to unlock stories. While no characters have been announced, the banner does have Cleo and Elisanne in aprons on it and the official teaser suggests a “strict priestess” and “man with love to spare” could be Adventurers with additional tales.

Dragalia Lost is available for Android and Apple iOS devices. To participate, you have to have passed campaign mission 2-1.