The King of Fighters series is twelve years old. In video game years, that’s a long time. When it was introduced, the arcades were still lively, with a health market for 2D fighters. And that’s two console generations – we’ve seen the decline of 2D to make way for 3D, and the rise of the casual market. And for a long time, it didn’t seem like there was a place for SNK in the new world.

Thankfully, they’ve since found their niche, and appear to be pumping out quality games just like the old days, even if they don’t draw the crowds as they used to. And with that, SNK has finally released The King of Fighters XI, for the Playstation 2. On a superficial level, it doesn’t seem like much has changed. 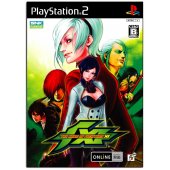 In the arcades, The King of Fighters XI ran on the Atomiswave board – while the system is a big step up from the dated Neo Geo hardware, there aren’t any SNK games that really took advantage of it. The backgrounds are all high resolution (and very pretty), but the character sprites and animations are the same as they ever were, just upscaled and filtered. That’s not to say the game’s ugly, because SNK is practically the master of 2D art design. The character artwork is some of the best the series has seen, and the presentation is the cleanest it’s been since KoF 99.. Just make sure to turn on the progressive scan mode (hold Triangle and X at boot up) if you’re using an HDTV to clean up some of the interlacing issues.

But this is a 2D fighter, and ragging on the visuals is pointless – it’s all about the gameplay.  The King of Fighters XI maintains the tag team system from 2003, so you can switch between either of your two characters in battle. Also new is the skill meter, which determines how often you can use cancel attacks and builds separately from the normal power gauge. There’s also a new type of cancel called a Dream Cancel, which lets the leader character cancel a regular super attack into a leader desperation move. If all of that went over your head, don’t worry – they’re all minor system changes that add to the depth of the game. Like the best of fighting games, The King of Fighters is as deep as you want it to be.

There are plenty of healthy new additions to the character roster – B. Jenet, the pirate lass from Garou: Mark of the Wolves has been added, as well as long-forgotten breakdancer Duck King. New faces include Oswald, a professional looking older man in a suit who uses cards as bladed weapons; Elisabeth, a Frenchwoman with an attitude; and Momoko, a little girl who looks like she stepped out of an 80s exercise tape, and fights with Capoiera dance moves. Also making an appearance is Eiji Kisaragi, the ninja who came from Art of Fighting 2 and had initially only appeared in King of Fighters 95. A couple of characters that were missing from 2003, like Kula and Kensou, have also been readded. One of the most original new fighters is Shion, a gender ambiguous kung fu fighter who can summon a spear out of mid-air and attacks with rope dart. While he/she poses a decent challenge when fought in singe player mode, the final boss – a white haired bishounen beast named Magaki – oozes of the uber cheap boss syndrome that has infected SNK games since the beginning.

This is already a fairly good cast, but SNK has dug even farther into their collection of games and pulled out four more characters – Gai Tendo, the wrestler from the long forgotten Hyper Neo Geo 64 game Buriki-One; Silber, a monstrous grappler from the same game; Hayate, the boomerang-wielding fighter, and Jazu, the claw-wielding, mask wearing beast, both from Kizuna Encounter. All of these appear as hidden mid-bosses, who show up on the fourth stage depending how many super moves you’ve finished off opponents with, and are playable after being defeated.

The only issue with the character selection is that many stalwart faces have gone missing. Andy Bogard is still gone. Joe Higashi has been ditched. Leona is nowhere to be found. Chang has finally been given the pink slip. Even Mai Shiranui is missing. To make up for this, SNK added several characters to the Playstation 2 version, including Robert Garcia, Geese Howard, Mr. Big (from Art of Fighting 2), Tung Fu Rue (from Fatal Fury), Hotaru Futaba (from Mark of the Wolves), and, thankfully, Mai. All of their sprites and move lists have been directly imported from Neo Geo Battle Coliseum – these new additions bring the total cast to over forty five characters.

Unfortunately, unlocking all of these extras is a bit of a pain. You’ll need to battle through the Mission Mode, where you need to win matches under a variety of conditions. In order to unlock Mai, for example, you need to fight a survival match between all of the other female combatants in the game, with your health restoration based on the number of super combo finishes you’ve landed. Considering you can’t change the difficulty level, many of these challenges prove to be unnecessarily difficult, and the whole ordeal just feels like a roadblock towards fully enjoying the game. They exist solely to “enhance” the single player aspect, which completely misses the point of 2D fighting games, which are meant to be played with a human opponent anyway. It’s not like there isn’t a lot to unlock in the single player mode. Like all of the previous games, each team has their own unique ending, along with a ton of bonus artwork for finishing with different teams.  While there is an option for online play, it’s practically useless to those outside of Japan.

All of the menus are in English, but the win quotes and endings are in Japanese. For the most part, the game is perfectly playable, except for some of the win conditions in Mission Mode.

Like most 2D SNK fighters, it’s unlikely to see American release unless it’s bundled with another game, and SNK currently has no plans to do so. (This would make a great package with Neo Geo Battle Coliseum, hint hint.) However, it may be brought out in Europe by Ignition.

+ Pros: One of the fastest, most enjoyable entries in the series to date, with a huge character roster and solid presentation

– Cons: Unlocking some of the extra characters is a pain

Overall: The King of Fighters XI is one of the best entries in the series – it’s different enough from the older games to distinguish itself, has a full character roster, and is one of the most balanced entries to date (and you can adjust it to an Arrange mode if you find certain character too overpowering the Arcade mode.) Combined with an excellent soundtrack and the same stylish look that SNK is know for, this somehow manages to beat even Neo Geo Battle Coliseum as one of the best 2D fighters they’ve put out in a long time.