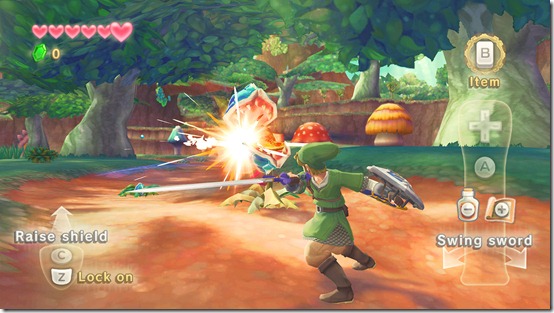 Nintendo’s press conference demo of The Legend of Zelda: Skyward Sword appeared laggy, perhaps unresponsive, but my hands on experience was nothing like that. When I got my hands on Skyward Sword and moved the remote left, preparing for a slash, Link’s arm (and sword) accurately followed me. I swung the remote and sure enough Link copied my motion, hitting a grassy patch in front of him.

There’s more to The Legend of Zelda: Skyward Sword than waggle, dare I use the term. In fact, Link won’t follow a flurry of remote-to-sword swipes well. Compared to other Zelda games, combat in The Legend of Zelda: Skyward Sword emphasizes precise slashes over rapid hits. Take the Deku Baba, as an example. You can shake all you want, but Link won’t defeat it unless you match a slash with the way the carnivorous plant opens its mouth. If it opens its mouth vertically, you can split the Deku Baba with an overhead chop. Basically, there are three kinds of attacks – horizontal, vertical, and diagonal. The direction the attack comes from matters too, but we’ll get to that later. Oh, Link still has his hallmark spinning slash. To do it, you have to swing the remote and nunchuk at the same time. It’s useful when a group of pig-like monsters armed with meat cleavers surround Link.

What would a Zelda game be without items? A handful of tools were available for Link from the get go in the E3 demo, but players will have to find equipment, just like other Zelda games, in the final version. You can switch items on the fly by holding B to bring up a menu and pointing at the tool you want on the screen. The whip was invaluable during the demo because a single crack could hit multiple bats. Similar to the boomerang, the whip doesn’t defeat Link-sized enemies, but it can stun them. Switching back to the sword takes little time so you can stun and then slash the porky ground creatures. Controlling the beetle, a projectile you can fire to pick up far away items, is as easy as moving the remote. The beetle flies depending on how you tilt the remote. Watch out for Deku Plants while using it! You can’t damage them with the beetle. The bombs are the most evolved item in Link’s arsenal. In addition to throwing them by making a lobbing motion with the remote, Link can roll them on the ground as if they were bowling balls. 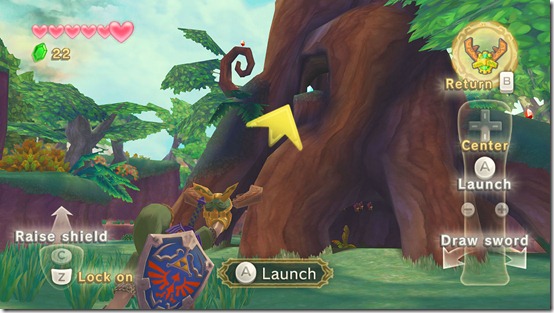 It seems like Nintendo took the bowling ball controls straight out of Wii Sports and implemented them for bomb rolling in The Legend of Zelda: Skyward Sword. The bow and arrow controls are reminiscent of archery in Wii Sports Resort and the sword slashing reminded me of the Japan-only release Zangeki no Reginleiv. The Legend of Zelda: Skyward Sword feels like it is the culmination of those games plus Twilight Princess.

Link has two other modified items, his shield and bottles. You can raise Link’s shield by raising the nunchuck. This makes Link block and sets up the shield bash, a move that lets Link reflect Deku nuts with the C button. Using potions to refill life is faster in The Legend of Zelda: Skyward Sword. You can restore health without opening any menus. Potions are mapped to the minus (-) button. 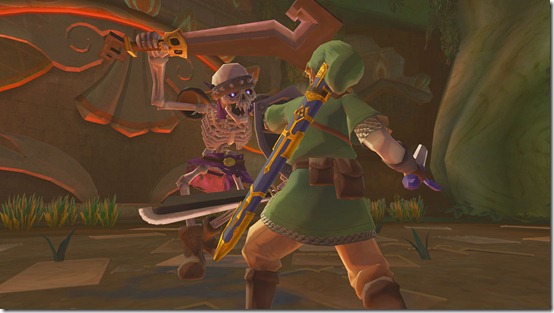 After slicing through bamboo gates and aggressive pigs, I went straight for a boss. The demo had two bosses – the scorpion and a skeleton. I blasted a rock door by rolling a bomb and ended up with the skeleton. This monster was armed with two swords, which it used to block attacks. I needed to get between them. Sometimes the skeleton would leave itself relatively open by holding both blades horizontally. This stance would shield the skeleton from vertical slashes, but a horizontal slash would pass right through. Other times, the skeleton would hold its swords like an “L”, which would deflect downwards slashes and horizontal attacks from one direction. You could wait for a more open stance, but it is possible to hit the skeleton in this position. The trick is to come at the skeleton with a horizontal attack from the opposite direction. So, if it’s blocking the left side, a slash starting from the right would hurt the skeleton. A few hits and a potion swig later, and the skeleton’s bones were on the ground. I passed the remote to someone else and went on to play another game.

This is the closest thing to being Link, short of finding the Master Sword and a green tunic in a forest.