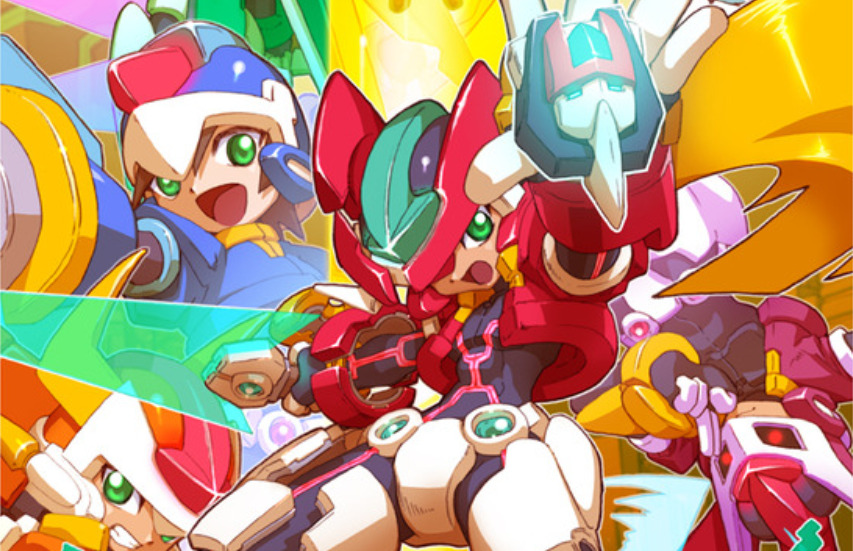 Capcom has updated its Rockman Unity community blog with an interview with Mega Man ZX character designer and scenario writer Makoto Yabe, also known by his penname KOU. Yabe was a member of Inti Creates before leaving to work freelance, and later became the character designer for Shantae and the Pirate’s Curse, Shantae: Half-Genie Hero, and Legend of Dark Witch 2.

In this interview, Yabe talked about how Mega Man ZX came to be, especially since the team was unsure whether it would be yet another sequel to the Mega Man Zero series or not. He also went over other behind-the-scenes facts.

Now then, regarding how the project for Mega Man ZX got started, was it decided from the start that it would continue on in the world of Mega Man Zero?

Makoto Yabe, character designer and scenario writer: Actually, at first it wasn’t decided whether we would make Mega Man Zero 5 or the brand-new Mega Man ZX. And so, the project discussion period between Capcom and Inti Creates took a long time.

Yabe: So, from Inti Creates’ side, we were hoping that “Because Zero was completed with Zero 4, we’d like to go with a brand-new game”. And after the project and character designs were tasked to me, I went to visit Capcom. I said, “We’re going to go with this for the next Mega Man.” “Oh, that looks good.” We had a conversation like that.

Yabe: Up until it was decided that we’d go from Mega Man Zero to the new ZX, we continued to work on things like the color gradient and the like for the game. The point was that we wanted to entice Zero fans as well, and so in this respect, it was decided that [Toru] Nakayama-san would work on the package illustration and other visuals. with the main visuals be drawn by Nakayama-san was the suggestion of Capcom’s director [Yoshinori] Kawano.

So, considering that it’s a continuation of Mega Man Zero‘s world, was your art style as the character designer influenced by that series?

Yabe: At first, I wavered a bit. I tried to replicate it a bit, but Nakayama-san has a very distinct way of drawing, so there were some parts I could mimic.

[laughs] So what sort of process was it like going from Mega Man Zero 5 to developing ZX?

Yabe: Inti Creates’ president [Takuya] Aizu’s opinion was to ask me to “make it so that it could go either way.”

[laughs] What a difficult order. It must have been really troublesome!

Yabe: [laughs] There was some sort of structure, as from the very beginning we were given the order to create a protagonist “that retained the sort of feel Zero had, but wasn’t Zero himself and rather was someone who had become a successor to his powers.” We designed the characters based on that direction. Also, since there was a four year gap since the Mega Man Zero series, the player base would have grown older.

True. While super fans are born in this manner, it makes it harder for newcomers to join.

Yabe: In the same period, Mega Man X7 and X8 released with Tatsuya Yoshikawa as the character designer. Even the boldly-colored X series designs had evolved into stylish designs aimed for an older audience. There was this view during development that the player base for the X and Zero series had overlapped, and so with President Aizu’s direction, we redid it and aimed to create a wide-open world that aimed to bring in the young players that the original Mega Man X aimed to appeal to.

Was it planned from the beginning to make the game a “transforming hero” game?

Yabe: President Aizu’s idea was to “pass on Zero’s power in some form.” But we didn’t want to make it a continuation of Zero’s legacy, as Zero had already settled things in his story. And so, the story setting of Biometals, which would only pass on the “power” of certain individuals, was created… Or so we thought, but the moment we heard that Mega Man Starforce, developed by a completely different team, was also a “transforming hero” game, we were shocked. [laughs]

Yabe: At first, the story was created so that even if talked to, they would stay as mysterious items that would sometimes glow in a meaningful way. However, with the upgrade in hardware specs on the Nintendo DS, we were able to add in full voice acting, which was how it started.

I see, so it was the evolution of hardware that added more to the Biometals.

Yabe: Right. If we made it on the GBA, it wouldn’t have become something like that. So, because now we needed to add in conversations with the Biometals, we ended up having to rewrite the entire story scenario.

So thanks to the sound director’s unreasonable request, it was decided that Biometals would have their own conscience. [laughs]

Mega Man Zero/ZX Legacy Collection is available on the Nintendo Switch, PlayStation 4, Xbox One, and PC. The original Mega Man ZX released on Nintendo DS. Check out our playtest here.