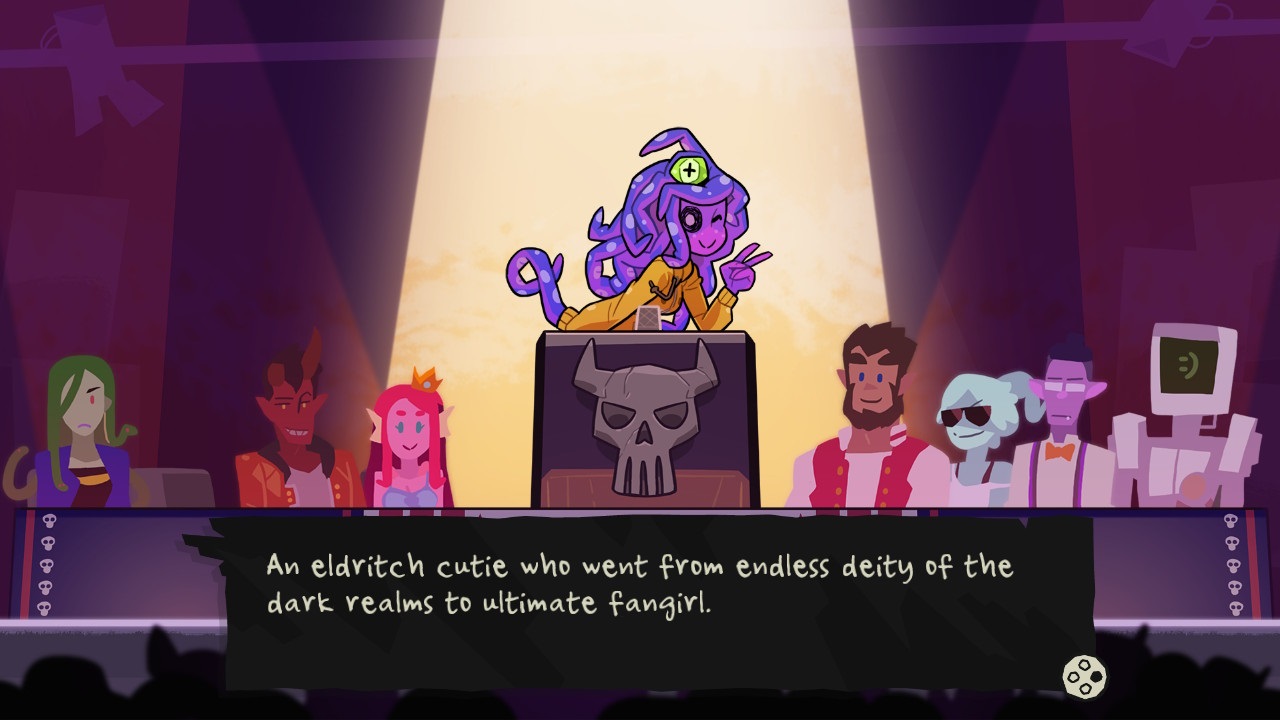 There’s a new dating sim on the Nintendo Switch, and it can help keep things short, sassy, and sweet. The Monster Prom Switch port has arrived with Monster Prom XXL, an adaptation that gives people the base party game and its Second Term expansion with new love interests and extra events. For something that could take under a half hour to play, there’s a lot there.

For those who are unfamiliar with it, Monster Prom XXL is a combination dating sim and party game. Whether you play alone or with up to three friends, your goal is to get one of the monsters at your school to go to prom with you. An initial personality quiz, items you purchase, and activities you participate in influence your stats, how much money you have, and if one monster will be initially into you. You then have, depending on which length game you choose, a few weeks to try and spend mornings, lunch, and evenings participating in events that could lead to you building up enough of a relationship with at least one of the love interests to convince them you’d be a good prom date.

First, the Monster Prom Switch port is right at home. This is a system that has been picking up from the PlayStation Vita as a visual novel and dating sim machine. A lighthearted visual novel with dating sim elements that offers multiple romance options that can be pursued by players regardless of gender, with lots of events, endings, and outcomes, is a perfect fit. Especially since it’s essentially a “lite” model. You can choose between short or long games, which can range from around 20 minutes to over an hour, depending on how many people are playing. You can go it alone, or you could use it to introduce friends to the genre in a funny, social way. It works.

Also, for something so brief, it’s pretty good at being character-focused. Between the base game and included Second Term DLC, you have Damien, Calculester, Liam, Miranda, Polly, Scott, Vera, and Zoe as love interests. If you buy certain items or do certain things, you can unlock different events or love interests. While you don’t have time to really get to know everything about someone, multiple playthroughs and just… having fun with it helps a lot. There are 559 events and 1976 outcomes, after all.

There are some downsides, unfortunately. One is a relatively minor one. While Monster Prom XXL is theoretically the perfect sort of party game/visual novel for the Nintendo Switch, it’s coming out at the worst time to play it. There is online multiplayer, which worked well when I was able to take part in a session.

But the heart and soul of it would be the local multiplayer, due to the prompts to help determine who would be the one to go “first” between rounds. It feels like a game where maybe you try to barter with one another in person or trash talk, and you can’t get that same experience online. Given how easy it is to grab and go with a Nintendo Switch and the options that would let you even go with pass-and-play or multiple controllers, it’d be easy to take it anywhere and get everyone dating monsters.

More worrisome is a save data issue. Despite updating to a patch that brought me to version 1.2.1 of the Monster Prom Switch port, my save data repeatedly ended up corrupted. Considering part of the fun is unlocking endings, getting events and images for the gallery, and watching as you gradually earn everything over runs, it was terribly frustrating to see my progress disappear each time. (Especially since it doesn’t support Save Data Cloud backups, it wasn’t like I could pull from a past save.) I found completely deleting the save data ended up resolving the issue in my case so far, but it is something people should be aware.

Editor’s Note: The developers have gotten in touch. Update 1.2.1 does fix the save data corruption issue, but those who began playing before the patch must go to System Settings, then Data Management, then Delete Save Data, and select Monster Prom XXL to delete their old save and create a new one.

Really, the only things holding the Monster Prom XXL Switch version are issues that could be fixed with time. We’re in a pandemic situation, which isn’t exactly ideal for local multiplayer, but there is online for now and eventually we’ll be back playing with friends again. There’s that corrupted save data bug, but so far completely deleting the save seems to have fixed that and I’m fairly certain updates will eliminate it completely. The concept is strong. The writing is often clever and frequently comedic. It capitalizes on things people love about visual novels and dating sims and adapts them to a setting where they can be enjoyed quickly alone or with others. When it works, it works well.

Monster Prom XXL is available for the Nintendo Switch. It can also be found on PCs.