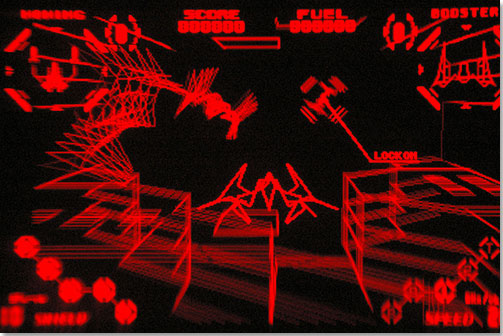 A large majority of people today identify 3D gaming technology with the Virtual Boy, a semi-portable device released by Nintendo in 1995. The Virtual Boy used parallax imaging — as seen in the above screenshot of Red Alarm — to create an impressive illusion of depth in its games, but ultimately, it failed in the market. The problem with the device was three-fold.

For one thing, the Virtual Boy could only display games in a monochromatic red colour. For another, the head-mounted display that it came with was a clumsy solution at best. And finally, prolonged use of the device had a tendency to lead to headaches. With so much working against it, it’s no surprise the Virtual Boy wasn’t a runaway success. 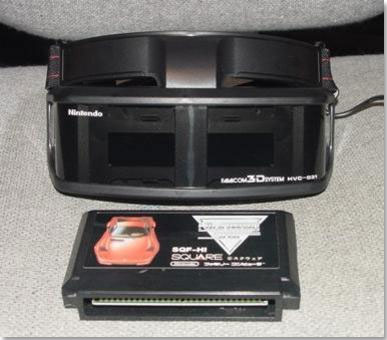 But the subject of 3D technology at Nintendo goes back even further than the Virtual Boy. It goes back over 20 years, to the days of the Famicom Disk System in Japan, in a game called Famicom Grand Prix II: 3D Hot Rally. The game was compatible with the Famicom 3D System, which was an accessory that took the shape of specialized 3D goggles that allowed you to experience stereoscopic 3D imagery in games programmed to support it. At the time, these goggles used the primitive “shutter glass” method of conveying a 3D experience. Two other games that supported the 3D System at the time were
Highway Star and Falsion.

Despite the Virtual Boy’s failure, Nintendo were willing to try again. Earlier in the year, we reported that the company secretly designed the Gamecube to work with 3D technology, should there ever have been a need to explore that avenue. In a special E3 edition of Iwata Asks, Nintendo shed a little more light on the subject.

“We actually tested [stereoscopic imagery] during the Nintendo Gamecube era,” EAD1 head, Hideki Konno, revealed. “We used the game, Luigi’s Mansion, to test out 3D, a little after the game was released.”

This was facilitated by connecting a stereoscopic LCD display to the Gamecube. “It had depth. We were able to gauge distance really well, like the room’s size and the sense of scale displayed in the screen,” Konno continued. “We moved ahead to the point that we thought we could create a new type of play, but the reason we didn’t move forward was the fact that, at the time, the console and the LCD device were separate.”

While 3D on the Gamecube was shelved, the experiments didn’t stop there. Next, Nintendo’s teams tried to incorporate stereoscopic imagery in the Gameboy Advance, as Iwata revealed in an interview with VentureBeat. By attaching a 3D display to the device, Nintendo were able to get 3D functioning on the GBA as well. But once again, it wasn’t a market-ready solution. “The graphical processing power of the GBA wasn’t good enough,” according to Iwata. “So we had to give up on that idea because it wasn’t appealing enough to consumers.”

By the time Nintendo began development of the Nintendo DS, the numerous hurdles and setbacks they had faced with regard to 3D technology had discouraged them from exploring the idea of stereoscopic imagery yet again. Furthermore, between its two screens and touchscreen, the Nintendo DS was already packed with features and the company felt that adding further to the feature set — and as a result, manufacturing costs — of the device would not be economically viable. 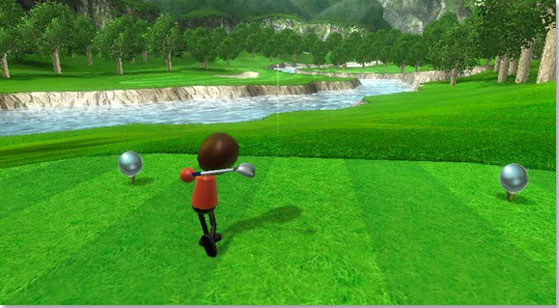 By studying past quotes, we also have a relatively clear understanding of why 3D imagery was not incorporated into the Wii. This is because Nintendo felt multiplayer or family-oriented games weren’t suited to a 3D experience, given the need for glasses and the fact that the Wii is a console that encourages movement. However, there was, at one point, a tech demo of Wii Sports Golf running in 3D.

The company finally revisited the idea when designing a successor to the DS. The difference, this time, was that processing power was higher and that the parallax barrier technology was finally a viable solution, given the screen resolution the new device offered. The visual output was encouraging. It was at this point that that Nintendo decided it was time to push ahead with a 3D system, although, they were still uncertain about the impact of 3D on a consumer level.

Luckily, the release of one James Cameron’s Avatar hinted that their risk would pay off. TV manufacturers were beginning to adopt the technology, and it was clear that consumers found the prospect of 3D attractive.

“It was great luck because two years ago, when we made the decision, it was just impossible to predict these things,” Iwata concluded. “Looking back, all of our work paid off. You have trial and error. But we were able to track the progress and predict when the technology would be mature.”

Does this, perhaps, mean that someday, we could see a new Wii with 3D functionality built into it? Maybe. Iwata’s take on it is: “If you display a 3D image, the image quality becomes extremely bad, so we’d probably do it with the next system. We’re thinking that the timing should be once the 3D television adoption rates crosses the 30% mark. We’re looking at the adoption trends.”