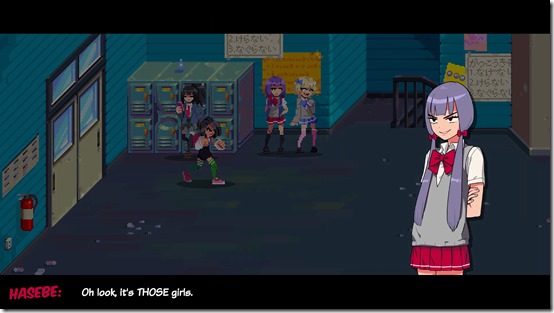 River City Girls is a game that never forgets its past while moving forward into the future. WayForward is clearly well aware of the Kunio-kun series and its background, as well as Technos’ other works, and isn’t afraid to do all it can to represent it within the game. This means a lot of moments where people who have loved the series for years and pay attention will be rewarded with both major and minor representations of characters over the years. (The most surprising callback comes up during ending which we’ll talk about in a later article.) The game pays a lot of tribute, which people might definitely appreciate.

Some of the first moments come when Misako and Kyoko are starting to break out of the school. As you go from classroom to classroom, multiple references to past characters and games come up. As you start to make your way around, our heroines will run into Hasebe Kazumi and Mami Shimada. There is some animosity, which makes sense in context. Both Hasebe and Mami made their first appearance in River City Ransom, with the former being Yamada’s girlfriend who was Kunio’s childhood friend and helps him and the latter being Riki’s girlfriend. As you go through the classrooms, you’ll happen upon an informational video about puberty starring Abobo (from Double Dragon). When you finally get to the school’s exit, then former Shin Nekketsu Kouha: Kunio-tachi no Banka boss Misuzu is there to try and keep the young women from leaving. (Though, she’s also appeared in plenty of other entries and spin-offs.) 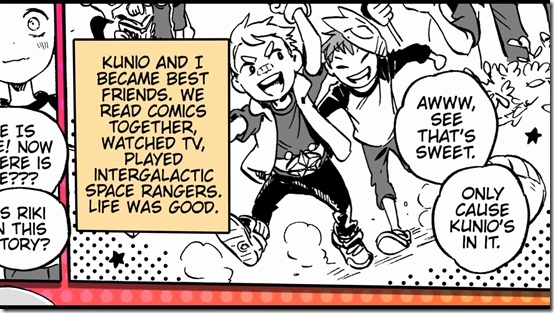 One of the better extended cameos has to do with fleshing out a familiar face. The River City Ransom boss Taiki Yamada is the second boss Misako and Kyoko have to face in River City Girls. As part of his introductory sequence before the boss fight, which takes place on a rooftop just as it did in River City Ransom, we hear his whole origin story. Once again, we learn how he and Kunio started out as friends and originally went to the same school as Hasebe. Not to mention, his supposed dark arts magic attacks are something of a callback to his abilities as Slick in River City Underground, what with his supernatural summoning of pillars to crush enemies.

Speaking of Abobo, his appearances here each call back to different appearances. One of the topics he brings up ahead of his boss fight is how he kidnaps lots of people, so he can’t be certain he was involved with Kunio and Riki’s disappearance. (Considering how many criminal endeavors he was involved with in the Double Dragon series, this makes sense.) He also showed up as a principal of River City High School in River City Ransom, which explains why he would show up in an educational video about becoming an adult. One of his attacks, where he punches the ground and rocks rain down from above, resembles the Abobo’s Big Adventure Rocky’s Rage attack. 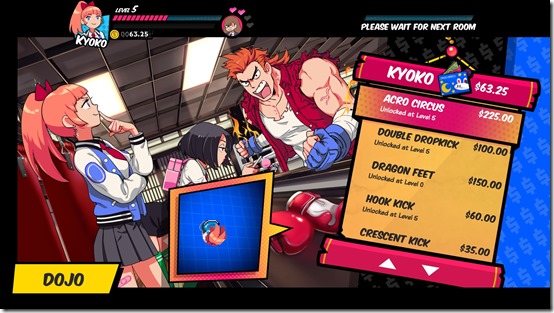 Speaking of Abobo, he isn’t the only Double Dragon character who appears. Other characters from show up in River City Girls too. If you visit a dojo, you are going to see Jimmy Lee or his brother, Billy. Marian is there to sell you accessories at Swaggage. Double Dragon Neon’s Skullmageddon is working at the pawn shop. People from other related games just keep coming up in these pleasant ways, perhaps when you least expect to see them.

These are even some of the more obvious ones. River City Girls is filled with references and asides. Lots of minor NPCs appear again as enemies or shopkeepers. The layout of the school is identical. Similar moves appear. It just keeps calling back to the older games in both the Kunio-kun and Double Dragon series is rather fun ways.

River City Girls is available for the Nintendo Switch, PlayStation 4, Xbox One, and PC.