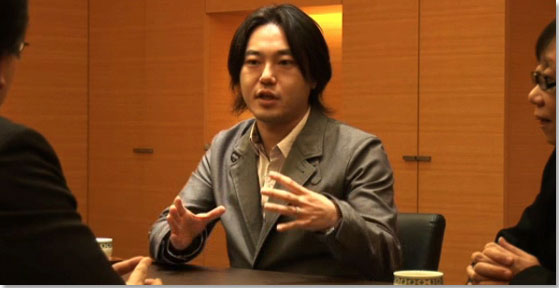 Dragon Quest series originator, Yuji Horii, believes the reason for the series’ popularity in Japan could be that it serves as a mainstream topic of discussion. That Dragon Quest is more than just a game — it’s, in a sense, a communication tool. If there were any doubts to that theory, Dragon Quest IX shatters them. Specifically, the game’s “Tag Mode”.

The Tag Mode in Dragon Quest IX has had quite the social impact on Japan’s gaming populace, according to Horii, DQIX producer, Ryutaro Ichimura, and Nintendo president, Satoru Iwata. 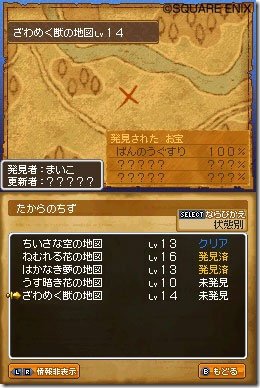 The main reason for this is the game’s treasure map system, which allows you to obtain treasure maps that lead to rare items or bosses in the game, either by finding them in the form of ingame items or by interacting locally with other DSes.

This map can then be shared with other players using the game’s Tag Mode function, where your DS, while closed, will interact with any other systems nearby that are set to Tag Mode as well. If you find a map, you can put your name on it, along with a message, to let people know you found it.

While this feature popularized the Tag Mode concept, where an increasing number of people started to go out with their DSes set in Tag Mode, what really sparked the social phenomenon, was the discovery of a certain rare map.

Eventually, since the treasure maps in Dragon Quest IX are randomly-generated, a certain player came across one with an extremely rare perk. As this map spread to other players, people began announcing map hand-outs on the Internet at specific real life locations, and players would turn up just to be able to gather the valuable map data.

It was this phenomenon that originally gave rise to the Dragon Quest pub in Akihabara.1 In about two weeks, Ichimura reveals, the map was spreading from Tokyo to Hokkaido. One way this may have happened, according to Iwata, is children asking their fathers to take their DSes with them on business trips, and leave them on in Tag Mode.

1. Note that this is different from Luida’s Bar in Roppongi.

At its peak, the Tag Mode was used by over 600 people in Akihabara alone. In some cases, people visiting the district from other parts of Japan would spend a day there, in the hopes of obtaining a good map before returning home.