The following discussion between two early Konami programmers took place in 2003. It was retrieved from Game Staff List Association Japan, a Japanese website that, among other things, aims to summarize, transcribe, and categorize interviews with video game developers.

Kazuhisa Hashimoto: Born on November 15th, 1958. Famous for creating the Konami Code, he joined Konami in 1981 and held the position of executive vice president at Star Online at the time of the discussion.

Shigeharu Umezaki: Born on December 7th, 1960. He joined Konami in 1983 and was executive vice president and general manager of production at Konami Computer Entertainment at the time of the discussion.

The Early Days of Nintendo Development at Konami

Shigeharu Umezaki, Vice President of Konami: I didn’t actually realize back then that Konami was a game company. [Laughs]

Kazuhisa Hashimoto, Vice President of Star Online: It was around 1983 or ’84 that they started calling it that. When I first joined, there were about 30 other recent graduates and the company was making circuit boards for coin-operated games. We were developing roulette and slot machines games like Piccadilly Circus that cost 10 yen per go, eventually making the hit list with arcade titles such as Scramble, followed by Super Cobra and Circus Charlie. These hits drove Konami to expand, and though I was put to work developing coin-operated titles when I first joined the company, it was only two or three years till we started developing for the Nintendo Entertainment System. 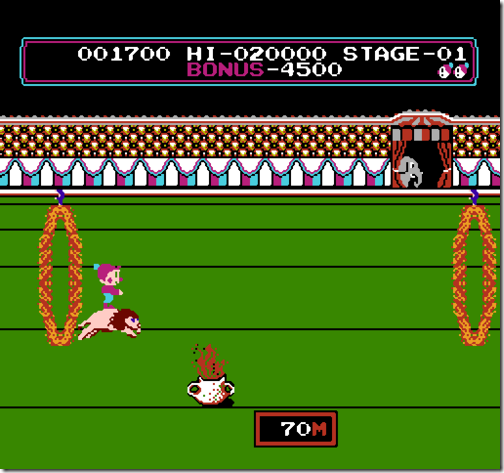 U: I did a little work on large screen display games and LCD games when I first started in 1983, but it wasn’t long before I was posted to console games. At first I made titles for systems like the American Atari 2600, and then I did MSX games and worked alongside the MSX unit and the Nintendo unit, eventually getting placed on the Nintendo team. These two units made up the core of the console gaming division.

H: Coin-operated games still represented the actual core of the business, however. The experienced people were all put to work on the coin-op games, while the employees who didn’t know a thing about programming or game creation were put into the custody of a single "teacher" who would teach them all to program as they went along. [Laughs] People weren’t separated into positions like "programmer" and "planner" at the time, and design tools didn’t really exist yet.

U: Game planning would be done by two or three people, regardless of whether they were programmers or designers.

H: Once we started making NES games, a few people who specialized in game design started appearing on the scene, but originally there really wasn’t anybody exclusively in charge of planning. We’d generally bring material over from the arcade games and then have a sort of duel of ideas. *laughing* It was normal for a NES game to be designed in four to six months by a team of four people. This practice didn’t really change until the Super Nintendo era.

Gradius was something we were ordered to port, so we tried to be realistic about it. The number of sprites on the NES is overwhelmingly small, so we had no illusions about what we were capable of. [Laughs] We just said to ourselves "Well, that’s as much as we can do!" and left the game at that. I had one guy under me, and he played through the coin-op version. That one’s really tough. I hadn’t played that much and obviously couldn’t beat it myself, so I put in the Konami Code. [Laughs]

U: What’s the story behind the Konami Code, anyway?

H: There isn’t one, really. [Laughs] Because I was the one who was going to be using it, I made sure it was easy to remember. The game took around half a year to develop, and, at the time, putting the code together was like an entertaining puzzle. "How on earth am I going to be able to fit these passwords into the program?" I’d ask myself. Gradius saw an incredibly poor reception, however. [Laughs]*

The company made almost 1,000,000 copies in anticipation of its release, but we were only able to sell 500,000 ~ 600,000. On the other hand, games like The Goonies, which we didn’t expect to sell well at all, sold close to a million. Back then, hidden characters were all the rage. I put three or four UFOs and the like in Track & Field and The Goonies had some too. I’d put them in really easy-to-find places, where anyone might expect them to be hidden. I think I was heavily influenced by the hidden commands in Xevious. I also have memories of playing Dragon Quest while making the game. Not to mention playing the FDS version of Zelda late into the night. [Laughs]

U: That’s right. Making games was always fun, but playing them was even better. [Laughs] I still play, but back then I was addicted to Dragon Quest. Aoyama and Hashimoto I took turns playing the copy we bought and finished it in a day. We were really moved by the ending and spontaneously decided that we wanted to put a staff roll in one of our games, too. When we were trying to decide what sort of title we should attach our names to, we all pretty much agreed that it should be something that valued technology over substance and started researching possibilities in-house soon after. The FDS was reputed to have a large memory capacity.

H: The system’s capacity was around 1 megabit, but if you programmed a game for quick disks it didn’t end up taking that much room, making it easy to develop for. However, reading data obviously went slower compared to ROM cartridges, so you had to take that into careful consideration. The original Legend of the Mystical Ninja was the arcade game known as Mr. Goemon, meaning our version was just a port. We turned an arcade game that didn’t sell well into Ganbare Goemon! A Tricky Journey, an original console game.

U: We expanded the map, anyway. The game’s title was originally "A Tricky Journey", but because we wanted to keep the name "Goemon" in it and because it wasn’t very catchy, we stuck "Ganbare" in there as well. *laughing* The first game only had one character, but when we adopted two-player simultaneous play for the sequel we chose Ebisumaru (originally localized in North America as Dr. Yang) to be Goemon’s partner. Because there was so much charm and personality in the face of one of the new staff members, we were quick to turn him into a character and put him into the game. That’s when we registered the designs for Goemon and Ebisumaru.

H: I was quick to point out that, in my opinion, it would be enough to allow players to simply wander around a large map. At the time, most games with staff rolls attached to them had lots of restrictions in terms of how freely you were able to move about, so I figured it be interesting to have one that just let you run around.

U: And one where items appeared when you jumped.

H: Consequently, I designed the game in such a manner that, even if you sucked at video games, you were eventually able to earn enough money to go into a shop and buy a pass to the next area. That way, anyone could beat it as long as they had enough time on their hands.

U: There were times when, say, players would have too much freedom and end up somewhere strange, however. The 3D dungeons were also incredibly long.

H: Idiots, you’re not supposed to go in there! [Laughs] It’s better to just keep playing. In terms of development, the idea of having 2 megabits of memory was absurd. We didn’t have any tools that allowed us to connect the maps together at the time, so I remember manually attaching pieces of paper to each other one by one. 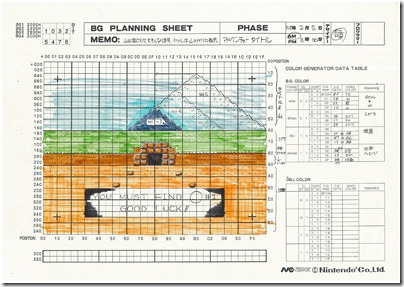 Graph paper maps from Nintendo’s The Legend of Zelda

U: Yeah, that’s right, they were all drawn out on big sheets of graph paper.

H: It wasn’t until after that we started using tools to make maps. I really didn’t think the game would ever be finished. That’s when we started getting actual designers joining the company. The development of The Goonies, Castlevania, and Goemon began around the same time. I was too fussy over the design of The Goonies, in particular, and map was pretty small as a result.

I was ordered make a hidden stage at the last minute. [Laughs] There was nothing else for it, so I changed up the colour palette and made it so you could access the level. "It’s small, so I can do it, right?" I thought to myself as I hammered it out. But from that point onward, I began to understand that we needed to use tools and that if we didn’t change how we did things, game development was going to get really annoying.

At the time, the whole process was deeply influenced by how Konami made arcade games. As you might expect, we didn’t have any tools for making big maps, but sprite tools would come to us from the arcade division. That might be part of the reason why companies that produced arcade games were releasing titles with better graphics at the time. The history of video game music was also embedded in arcade gaming. When we were doing NES games, the arcade division already had its own dedicated composer. In addition, our company was right next door to the Osaka College of Music, so we had graduates from there among our employees. [Laughs] I know there were some that worked on Contra and the like.

U: That’s why the sound was always critically praised, regardless of the hardware.

H: Yeah. There was a programmer who was part of the sound team, and he took the composer’s tunes and programmed them for use on the NES as well. The sound, at least, was done by a dedicated team.

U: The Nintendo era was also a time of personal growth for me. Back then, I was able to concentrate all my efforts on programming, which I had no previous experience with when I started off doing NES games, and I gradually began to comprehend its interest.

H: I’d have to say that the NES era was the most interesting to me as well. I think I was really happy back then, compared to the young people these days who are making games for current-gen systems such as the PS2. With today’s games being on such a huge scale, you have one person dedicated to making menu screens and another relegated to working on the interface.

The days when the programming, planning, and design was done by one person were limited to the Nintendo era. I feel a little bit sorry for people today when I think back to how I was able to influence all the aspects of game design. Even though I’ve gone on to participate in most systems’ launch titles, from Gradius III on the Super Nintendo and Parodius on the PC Engine to games for the PS2, I think I like the Nintendo era the best of all.